Repeal Day is today. It commemorates the repeal of the 18th Amendment! 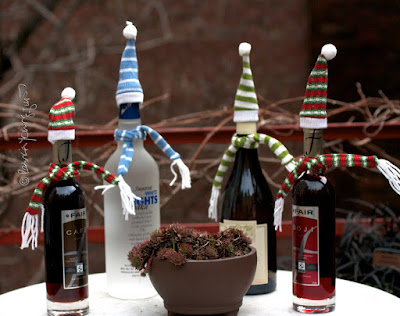 Today, December 5th, is Repeal Day! It commemorates the repeal of the 18th Amendment.  Once more, Americans were free to buy, sell, and consume alcoholic beverages. According to Holiday Insights, in "the early 1900's, many of the good people of America believed that alcohol was the root cause of many social ills in the country. Prohibition on a national scale, was promoted in part by the American Christian Women's Temperance Union. This movement grew in popularity. Ultimately, the United States Congress passed the 18th amendment on January 16, 1919. The 16th Amendment prohibited the manufacture, transportation, sale and consumption of alcohol.

"The ban on alcohol did little to improve the social conditions of the country, or to reduce crime. Rather, crime increased as racketeers got into the the business of making and selling alcohol.  The popularity of the 18th Amendment waned. More and more people and groups sought it's repeal.

And in honor of this day, one of the things I'd like you to know is that the hats and scarves which you may have used on your bottles of hard liquor, liqueurs, as well as wine, can be re-used once your bottles get tired of wearing this apparel!

The photo atop this blog entry features a few of my bottles decked out in hats as well as scarves; and it may be an image that you recognize, as I featured it in a 2011 post, Rockin' Around the Hens and Chicks! In any event, bottles filled with alcoholic beverages get tired of wearing the same accessories year after year, and, so they shared some ideas on how their articles of clothing could be used for charitble purposes!

One of the main ways a used hat or used scarf that once belonged to a bottle that was filled with an alcoholic beverage is to repair an injured Christmas ornament, as was the case with Harry, a figurine  style ornament who "works" as a caroler. He can be seen below, in a photo when he first came to my home a number of years ago. 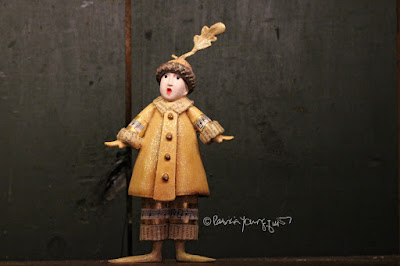 Perhaps he took nip from one of my bottles of wine or spirits, for one day I found him toppled over and his accident had caused the extravagant detail of his hat to be destroyed! This can be seen in the following picture. 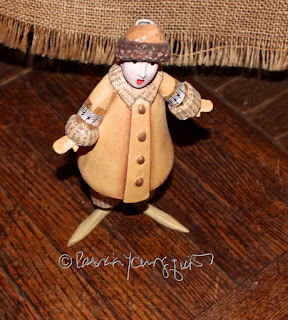 My bottle of White Knights Vodka quickly came to Harry's rescue and gave him the blue and white stripped stocking cap that he had been wearing! The hat fit Harry perfectly and one would never know it was disguising a destroyed cap, as evidenced in the following picture. 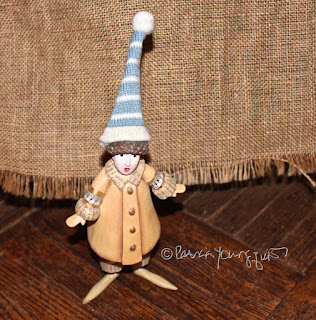 My bottles of wine, as well as my bottles of spirits and hard liquor found the story to be very compelling. Therefore when my figurine known as Lady Orange broke her hand, my bottle of wine jumped to her rescue, giving up its green and white striped scarf in order to protect her broken hand. Lady Orange can be see in the following two pictures as she looked prior to injury (the latter of the two was featured in a prior post here on Blogger). 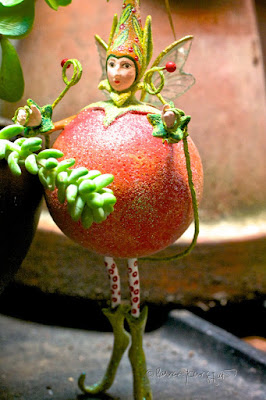 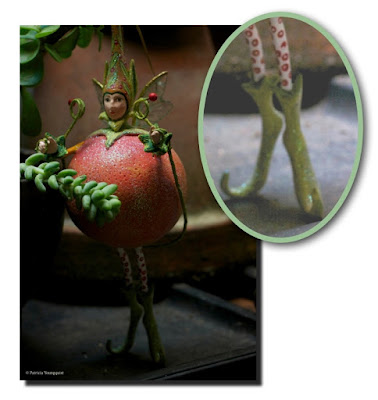 The next photo shows her making use of the wine bottle's green and white striped scarf after injuring her hand after she fell as a result of wearing such high heels! 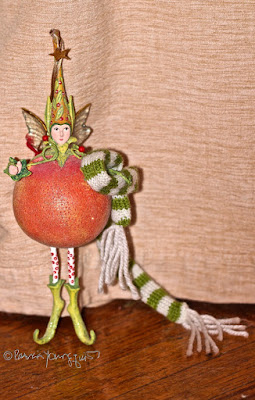 Seeing an injured ornament is not the only motivator a bottled alcoholic beverage to be compelled to loan its scarf or hat, they've also been known to make the gesture when a given figurine wants to disguise his/her affiliation with a given holiday.

For example Mr. Moon-In-The-Man who arrived here in 2012 for the Halloween season and was subsequently featured in a number of posts on hometalk  was most identifiable by the bat on his collar (as seen below) 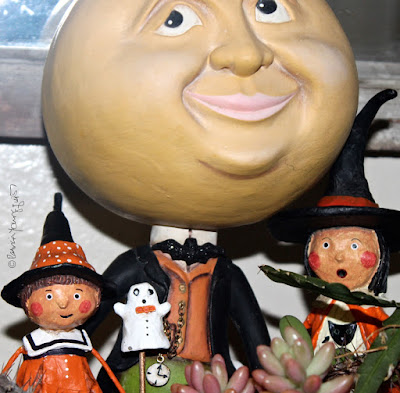 narrowing his prospects to Halloween festivities. He loved commiserating with all figurines but felt he couldn't do this in an appropriate manner (especially at Christmas time) because of the bat adhered to his collar!

Both the Goji Berry as well as the Cassis varieties of Fair Trade spirits empathized and did a coin toss to see which one of them could loan Mr. Moon-In-The-Man their red and green scarf so that he would fit in during the Christmas season! And indeed this scarf did give Mr. Moon-In-The-Man a festive Xmas holiday look (as seen below where he is pictured commiserating (at Christmas time) in my indoor garden of succulents! 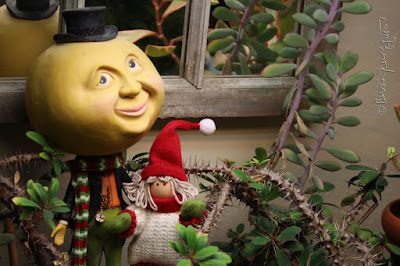 The Fair Trade Spirits were not the only ones compelled by the desire of Mr. Moon-In-The-Man to spend time in my home during a number of holidays; even the bottle of White Knights, who had let Harry use its hat, gave up their scarf so that Mr. Moon-In-The-Man could feel comfortable in my succulent garden during the various patriotic holidays as seen below. 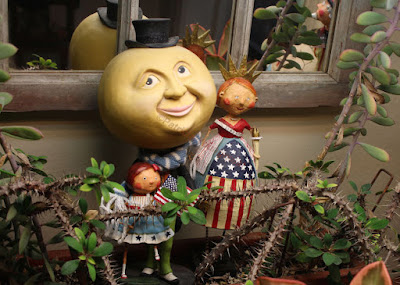 The generosity expressed by the bottles filled wth alcoholic beverages was not lost on Harry and when he was finished caroling for the season, he let a snow person use his hat! However, when Harry placed the hat on this snowman's head, the figurine did not dance around, instead, he proceeded to roast chestnuts on an open fire (as evidenced below)! 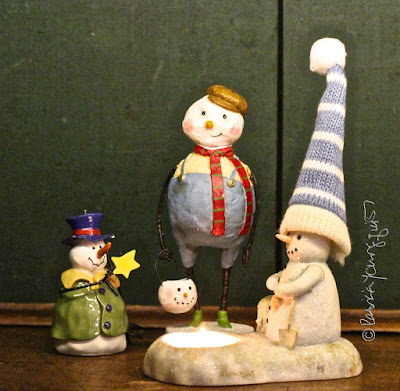 And with that thought, some of my other figurines (pictured below) and I wish you a Happy Repeal Day, with many reasons to toast the joys of life! CHEERS! 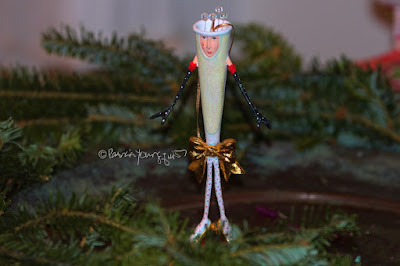 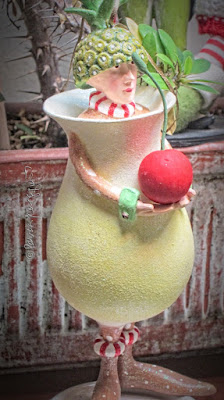 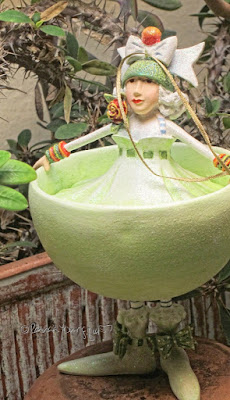 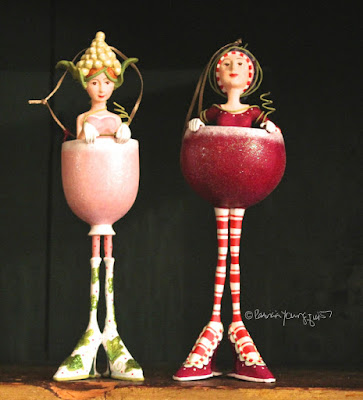 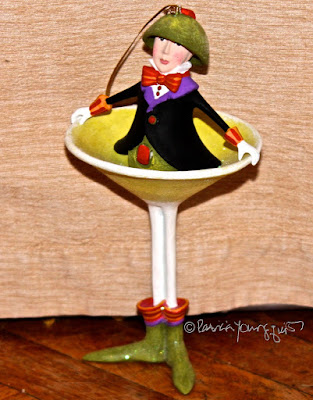