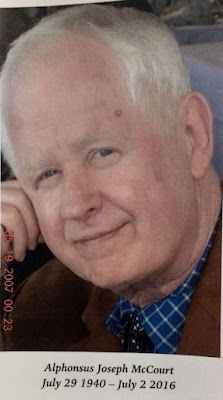 This past Monday night (11-7-16), I was very saddened to have learned that Alphonsus (Alphie) McCourt, the prolific author of, A Stone's Throw, and youngest brother of the late Frank McCourt (who wrote Angela's Ashes), died this past July! (A copy of the image that is evidently on Alphonsus's prayer card is featured atop this blog entry.) I knew of Alphonsus, his daughter and his daughter's caretaker because their NYC home is "a stone's throw" away from where I live.

In fact, I recently took a picture of the McCourt's fun Halloween decor which features pumpkins and a whimsical Jack-O-Lantern. 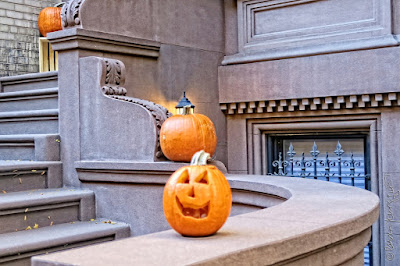 The McCourt's Jack-O-Lantern seemed to have a gleam in his eye and a warm smile —  as was certainly the case with Alphie! And since he and I both worked as writers, I had a number of conversations with him about writing.

In any event, I had been curious why I had not seen Alphie in passing as I was very often the case; but I assumed he was vacationing in his homeland in Ireland. Therefore, I was shocked and saddened when I ran into his daughter's caretaker (by chance) this past Monday night, for she told me that he had died in his sleep this past July!

Now, I'm trying to recall when I had my last conversation with him! I do remember that he and I shared an appreciation for long sentences, because they took time to read, involving a certain type of muscle which exercised the thinking process. We were both a bit unsettled about the character limit in certain cyber-venues, as it forces one to be truer to the limit of characters than what one has to say.

I told Mr. McCourt about a short piece that E.B. White had written back in the day when writers were evidently paid by the word. White's piece is titled, THE COST OF HYPHENS.  I've posted a copy of it below. 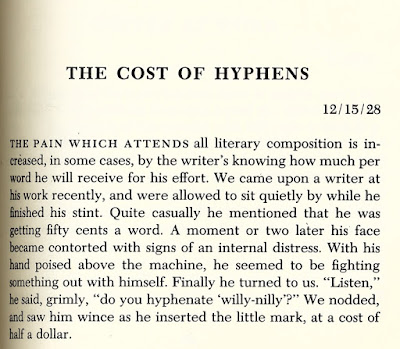 I will miss my conversations with Mr. McCourt; and my heart goes out to those near and dear to him; especially his daughter Allison McCourt! May Allison, her mother, as well as the other surviving family members, and friends of Alphie, be consoled with their faith; which teaches that those who go on before us, are just a stones throw away!

Rest in peace, Alphonsus, but do take time to intercede for those you leave behind, and in turn, I will try to do the same for you; especially during this Month of All Souls!
Posted by The Last Leaf Gardener