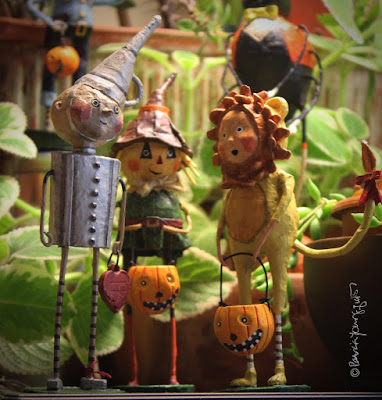 With Halloween being less than a week away, there is a lot of activity going on in my home. Most of the action taking place is occurring among the cast of characters (dressed in unique Halloween costumes) who visit me on an annual basis during this time period. When they first started coming to my place, they confined their antics within the constraints of the succulent garden that I have atop a pantry-style cabinet that I have in my kitchen.

The image atop this entry was taken a few years ago. It features a set of triplets who visited my succulent garden dressed as The Tin Man, The Scarecrow, and The Cowardly Lion, who as you may know, are the characters featured in The Wizard of Oz.


However, as the word got out about how much these characters enjoyed my place, more and more of their comrades began to come and my succulent garden could not accommodate all of them!

In fact this year, the visitors using my succulent garden are all dressed as witches and there are eighteen of them! They can be seen in the following photo where they are posing with Humpty Dumpty and four characters who are serving as costume judges.

This image with stories re these witches was featured in this past Saturday's Blogger post. As I mentioned in that entry, the limited  perimeters of my succulent garden as not deterred the whimsical characters from visiting me. Over the years, they have made themselves at home in my main living area which is a fact I discussed in a series that I wrote for hometalk under the following titles: Boo! Halloween in Both my Urban Terrace & Indoor Gardens,  Halloween Decor Indoors (mostly), Group B Wins The Coin Toss, Group A Wins The Second Coin Toss, Group C  Wins 3rd Coin Toss, Conclusion of Follow-Up Halloween Decor, Honoring National Pumpkin Day With a Contest in My Garden, and At Halloween and Always, Make New Friends, Keep the Old

But I've digressed! Getting back to the characters who are dressed as The Tin Man, The Scarecrow, and The Cowardly Lion: they surprised me by bringing a new with them this year who came dressed as a Winged Monkey, another character from The Wizard of Oz. He can be seen in the photos below. 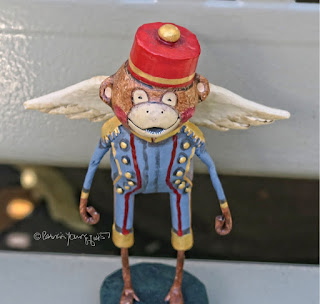 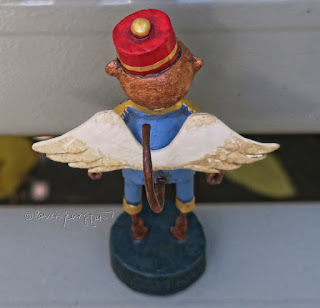 I must confess that I had forgotten about the winged monkeys and they played such an important role in the Oz story! I am surprised that the character dressed as a Winged Monkey came with The Tin Man, The Scarecrow, and The Cowardly Lion! I would've thought the guy dressed as A Winged Monkey, would've come with the girl dressed as The Wicked Witch (seen below).

The image of her was taken a number of years ago when she celebrated Halloween in my succulent garden. This year she did go into my succulent garden to join the witches seen in the group photo from Saturday's blog entry, rather she stuck close  to her friends who are dressed as characters from The Wizard of Oz, they are currently in my main living area, and I plan to write about them in tomorrow's blog entry.

Meanwhile, the young girl dressed as The Wicked Witch, is hardly wicked in behavior. She had a lot empathy when she heard the story of how my Jack-O-Lantern that melted. 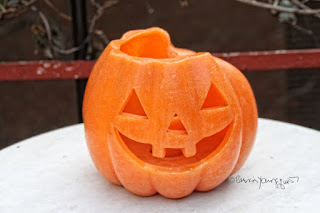