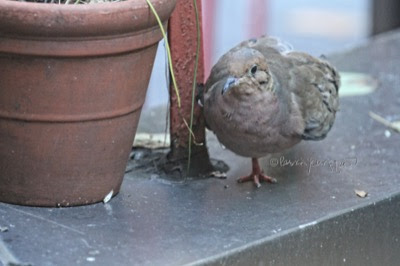 Welcome to the eighth posting of my fairly new blog series known as Tuesday's Truths. Today I'd like to share a cool fact re birds that have only one leg, such as the mourning dove seen in the image above, where he is making his way toward some seeds that fell from a bird feeder on to the ledge that surrounds my urban (NYC) rooftop garden.

I was so thankful to see him as I have been wondering about his well being. I actually heard him before seeing him because when he hops around on one leg, the sound of him moving about is loud, and it reminds me of the sound Laura, from the play The Glass Menagerie, made when she moved around.

Laura had a condition that caused her to need crutches to walk and she was very self- conscious about the noise they made. I don't think my visiting mourning dove is self-conscious about the noise he makes as he moves within my terrace garden and the ledge which surrounds it. However, it pains me to see him hopping about on one foot in search of fallen seeds. If I go outside to give him someone, he quickly flies away. Thankfully he has not lost his ability to fly.

In any event, my seeing the one-legged-mourner cause me to google the topic of mourning doves having only one leg, Two things came up in my search. One was my own blog post from the July 17th 2016 that I wrote when I first saw him; the other was a letter written to the Contra Costa Times, which can be seen below.


"DEAR JOAN: I had always understood that injured or sick animals became easy prey for predators, but in the past several months I observed a mourning dove at my backyard feeding area picking up seeds dropped from my feeder. It was curiously bouncing up and down on its abdomen. I soon realized that its strange method of locomotion was caused by only having a left leg. It appeared otherwise healthy and robust. Is this a common phenomenon, or had I observed a very lucky bird? Richard Sogg, Los Gatos"

The following is the answer given (by Joan Morris) to Sogg's query:

“DEAR RICHARD: Kind of both. One-legged birds aren't all that rare, and the bird does indeed have a bit of luck on its side. If you spend some time in the city, watching the flocks of pigeons scavenge for food, you'll probably spot a couple that have just one leg or are missing a foot. This comes from urban living. They get tangled up with human inventions and can lose a limb. That doesn't mean it only happens in urban areas, however. If bird parents build a nest with fibers that are too long, those threads can get wrapped around a baby bird's leg, cutting off blood supply and resulting in the loss of a leg or foot. Run-ins with predators also can cause damage. It makes life a little more challenging for the bird, but as long as it can fly, it can survive. Its disability makes it more vulnerable, but your mourning dove seems to be doing well.”

So, there you have it, dear reader, Tuesday's Truth for week eight: "One-legged birds aren't all that rare, and the (one legged bird) does indeed have a bit of luck on its side... It makes life a little more challenging for the bird, but as long as it can fly, it can survive." 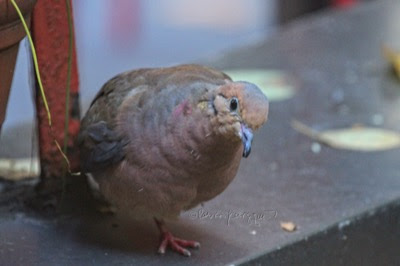 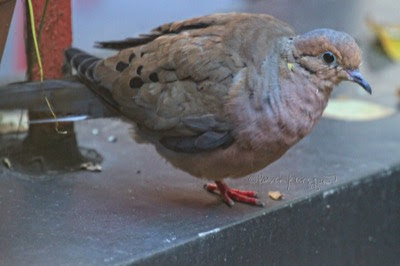 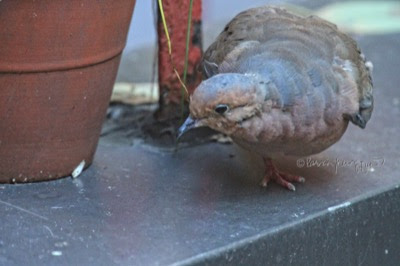