The Entertainment of Birds 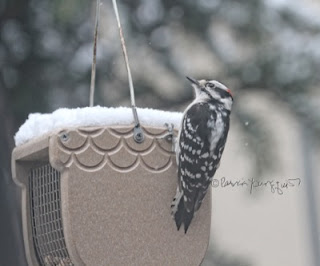 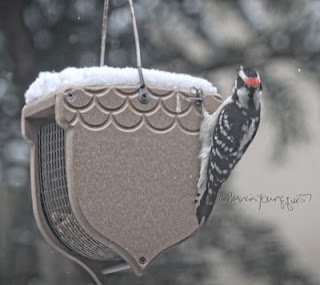 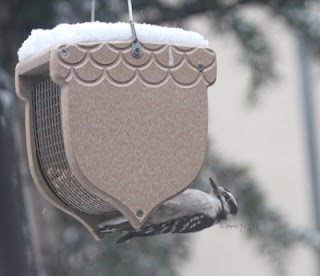 The last time I saw a Downy woodpecker in my garden was this past March. He entertained me with his antics re procuring butter-bud suet from a bird feeder in my urban — NYC — rooftop garden. (The photos atop this entry illustrate the woodpecker at the aforementioned buttter-bud suet feeder.) I was most impressed with his actions in balancing himself on the feeder, which still had snow atop of it.

And he seemed impressed with my accommodations, for I often saw him at the other feeders in my garden, as well as in my bird bath, and I caught a glimpse of him as he did acrobatics from different perching places in my garden. All of these woodpecker's actions are documented in the pictures below (which include him/her) at a suet-basket. 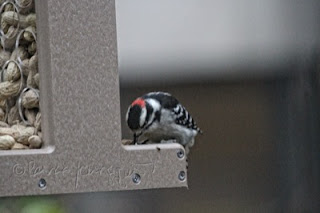 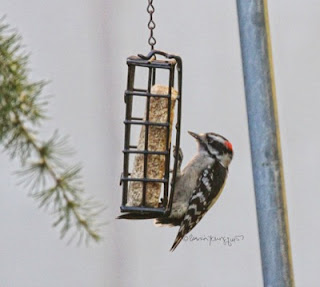 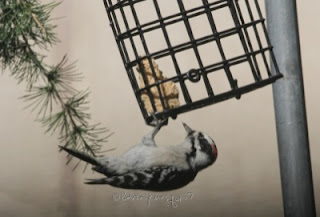 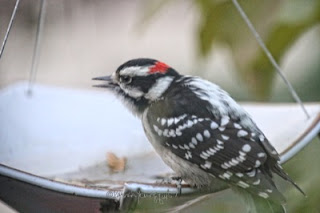 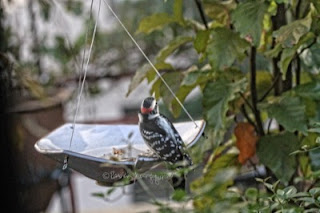 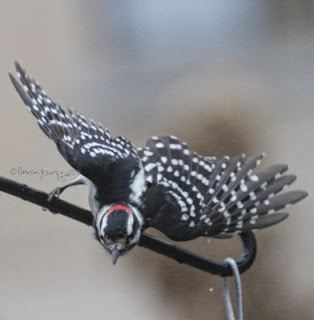 That woodpecker had been a regular visitor to my garden from October 2015 until March 2016. Then, without any warning, or taking the time to say goodbye, he was gone. He did not write, phone or even tweet me to let me know that he was ok!

But a couple of days ago, much to my pleasant surprise, a woodpecker appeared at the wreath-style peanut feeder in my garden. The pictures featured below are of a downy woodpecker enjoying the wreath-style bird feeder that I have there. I took the pictures while I admired the bird's persistence and tenacity in procuring peanuts. These photos are only a sampling of the many images I took as I observed the bird, which approached the wreath-style feeder from a number of angles, and used all types of positions in order to grab a peanut. 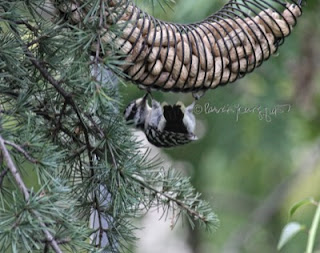 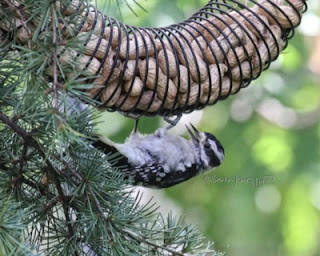 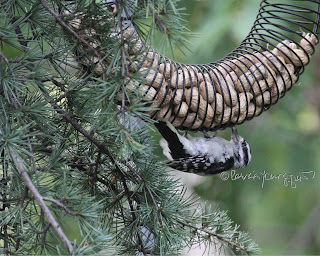 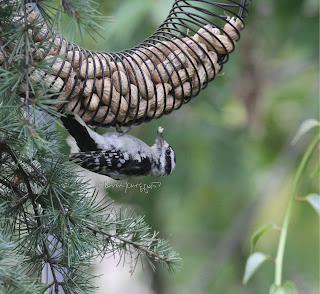 In any event, I truly enjoyed the acts the downy performed at my wreath-style feeder, where many bird types put on a one-bird performances. These include a baby pigeon as well adult pigeons; all evidenced below. 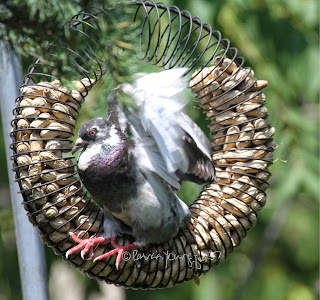 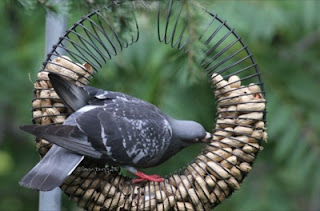 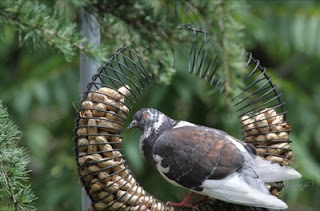 The chance to be at the wreath-style feeder is always welcomed by blue jays, which I've mentioned (with text and pictures) in a prior post. I am including in a number of new photo-ops of this phenomenon below. 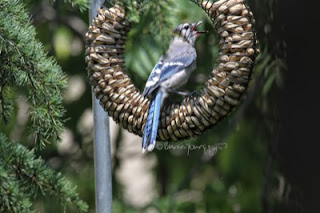 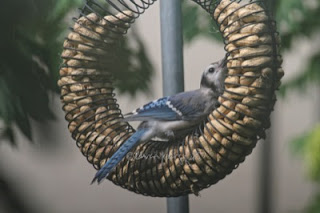 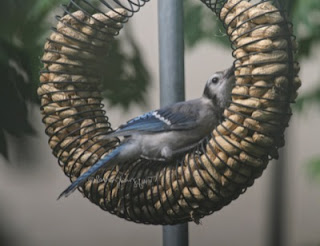 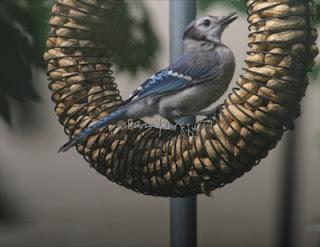 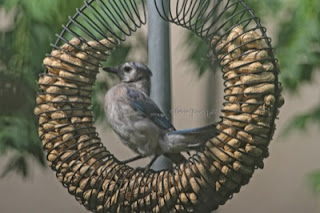 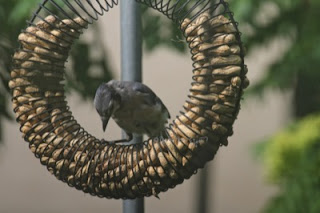 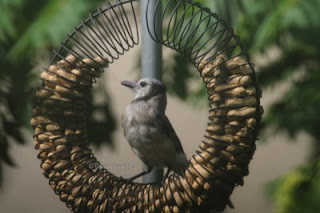 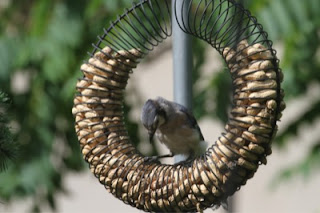 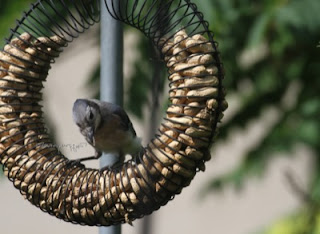 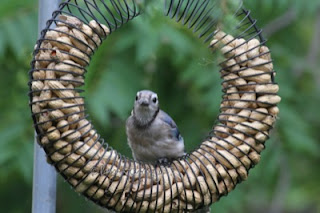 As you can see, I'm pretty impressed with the antics of this bird; and I dare to say that if the beloved author, E.B. White, were alive today, I believe he would be as mesmerized as I am by these avian performances.  I'll leave you with what he wrote about the performance of a house sparrow:

"ONE OF THE MALE SPARROWS in Turtle Bay garden made a wonderful discovery at quarter past nine this morning. He found a small length of confetti tied in a bow. The morning was springlike, although a trifle cool, and the combination of blue confetti and blue sky stirred him up. He carried his find to the branch of a large sycamore, where he sat waiting to be photographed. (It really looked as though he had on an outsized Windsor tie.) After a minute or two, he moved on to a willow, then to Dorothy Thompson's gate, then to an ailanthus. Pretty soon the word got around and other sparrows of both sexes showed up, the ladies to admire, the men to jeer. It was fairly obvious that the owner of the blue bow tie was uncertain about his next move. He was undecided whether nest building using a blue confetti bow tie as a sill piece (and face all the involvements and commitments that follow nest building), or whether just to wear the damned thing. He unquestionably was enjoying the fuss, and when the attention of the other birds flagged, he purposely dropped the bow, allowed it to spiral down almost to the fountain, then swooped and recovered it in midair. This drew  round of applause. We watched the act for twenty minutes, at the end of which time the sparrow dropped the bow again and flew away to a neighborhood saloon. It is a wearisome thing to be overdressed in the early morning."