In Honor of World Turtle Day 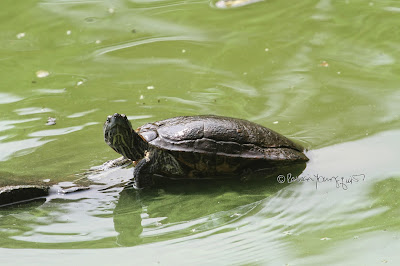 I've just learned that today, May 23rd, is World Turtle Day. According to Wiki, this holiday has been sponsored yearly since 2000 by American Tortoise Rescue "to bring attention to, and increase knowedge of and respect for turtles and tortoises, and to encourage human action to help them survive and thrive."

The picture featured atop today's blog entry is of a turtle at a lake just north of Strawberry Fields in NYC's Central Park, and he/she seems to be a perfect spokes-turtle for the occasion, given his/her quizzical expression. Turtles are often found sunbathing in this lake as they do their people-watching. This one was not camera-shy, another quality making him/her a great candidate for a spokes-turle on World Turtle Day (or any occasion for that matter). Other turtles – as is the case with yours truly — do not enjoy having their picture taken.

This is evidenced in the photograph of a turtle (taken at the same lake) below, where the turtle, unlike Gloria Swanson, was not ready for a close-up. 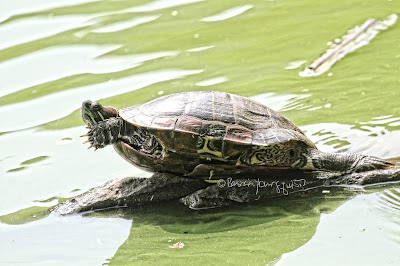 And while one will often see turtles at this lake in Central Park, a majority of this creature's type spend their hours in an area of Central Park known as Turtle Pond. Turtle Pond is an area of the park located in close proximity to The Delacorte Theatre.

Turtle Pond has served as an inspiration to me for many years, and, once upon a time I named my company Turtle Pond Art! In any event, during bygone years, I took an impressionistic pictures of the turtles at Turtle Pond, which I later rendered into a print (titled Turtle Pond) suitable for hanging vertically or horizontally. The latter orientation can be seen in the following picture. 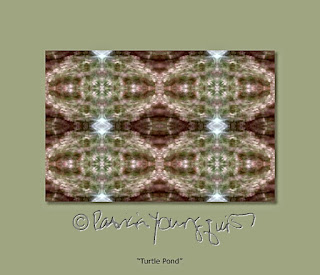 This impressionistic style of mine ultimately became a part of a series of photographic photographs known as Kaleidoscopic Prints, which can be viewed on my website, patriciayoungquist.com. Back in the day, many images from my kaleidoscopic works were featured in a prestigious art gallery on West Fifty-Seventh Street in NYC. Another image from that exhibit, Sunset In Riverside Park, can be seen below. 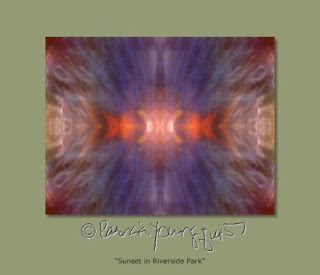 This particular image was ultimately featured in an art gallery belonging to Art Beyond Sight, and my process for creating it was the subject of an exclusive radio interview granted to me by John Montone of 1010 WINS. I featured this fact with interesting details in one of my very first entries here on Blogger and the interview is also posted on my web-site.

Sunset In Riverside Park and Turtle Pond are just two of a number of my kaleidoscopic prints that have been rendered into all-occasion notecards, which are also available via the Internet Boutique on my web-site.

While it's true procuring either the Turtle Pond image or note-card might be a nice way to honor World Turtle Day, I hope you will find these lovely creatures to be worthy of respect!