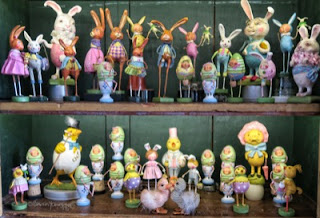 I know about these things because of the cast of characters who are visiting me for the 2016 Easter season, they can be seen in the photograph atop this entry. Some of you may recognize their faces as I featured them in an entry that I wrote on Facebook on the night of 2015's Easter Octave, where I included an image that is similar to the one below. 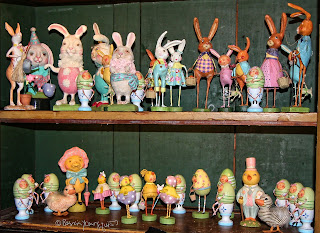 Moreover, last year I featured a few of these characters in individual posts during the week of the 2015 Easter Octave. You may refer to the aforementioned entries by clicking on the day of the week: Monday, Tuesday, Wednesday, Thursday, and Friday.

If you look closely at the two pictures featured above, you can test your attention to detail, for this year, I have six newcomers. Can you spot them in the top image? The answer can be found below. 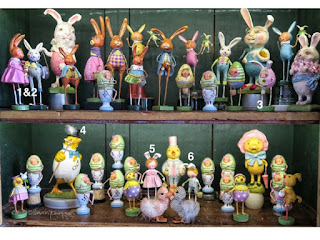 Additionally two of the characters seen in the group shot for 2015 (second image) have gone elsewhere. Can you determine what two characters from 2015 are not included in the 2016 photo-op (top image)? The answer can be easily spotted in the following picture. 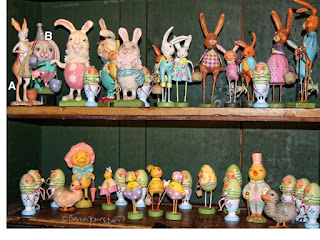 Character "A" is still in my home, but she is spending time in my succulent garden, and you might recall seeing her entertaining an Irish man during the period leading up to Saint Patrick's Day. Now that Saint Pat's Day has passed, she is entertaining another guy who can be seen in the photo-op below, tending to a succulent in my indoor garden. 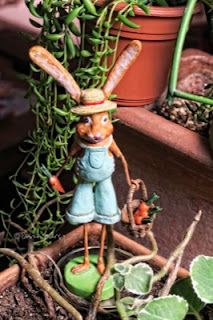 And he can also be seen tending to that "entertaining bunny" (who I've referred to as Character A) in the image below. 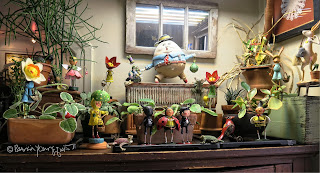 And a closeup of "Character A" can be seen in the following picture. 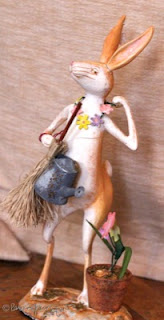 As for "Character B" (refer to image four), I sent her to visit my mother for the Easter holiday; but if you'd like to see a closer view of her, she can be seen in the photograph below, where she is flanked by a bunny in a pink dress and a pouty chick as her father seems amused by all of them. 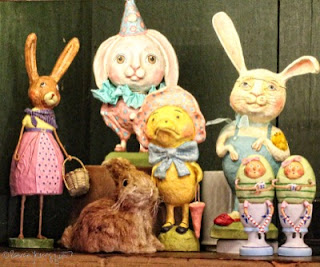 So there you have it, dear reader, a look into how my whimsical characters spend their Easter Octave, bringing joy and a lightening the hearts of those they encounter!
Posted by The Last Leaf Gardener