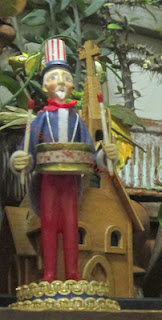 Today, July 1st 2013, marks the beginning of the 1/2 year mark for this year! And in bygone years, I have honored the occasion on Blogger with posts that reference the first six months of a given year in entries which you may refer to by clicking here for my 2010 posting, as well as here, here, and here for 2011 posts; and here for my 2012 post.

This year Uncle Sam (pictured above) has come to my succulent garden to celebrate this occasion, as well as to join the cast of characters that are here to perform on Independence Day, which is this coming Thursday, July the Fourth!

And, dear reader, you may be familiar with some of the characters as I referred to them the last time I posted here on Blogger as well as on hometalk.com and on in two entries on tumblr which you can refer to by clicking here and here.

But getting back to my newest succulent garden's guest, Uncle Sam, he has asked me to clarify a matter regarding his identity as he feel misunderstood! He wants to make it clear that he is not just an icon for the ready to eat Uncle Sam Cereal, which according to WIKI is a "breakfast cereal, first introduced in 1908 by U.S. Mills of Omaha, Nebraska. The company relocated to Needham, Massachusetts sometime after the 1970s. Attune Foods out of San Francisco acquired Uncle Sam Cereal in 2009."

Evidently, "In 1908, company founder (of the cereal) Lafayette Coltrin of Omaha was instructed by his personal physician to add flaxseed to his diet. Coltrin enjoyed the taste of toasted flaxseed on whole wheat flakes that he ate during breakfast so much, he decided to market the combination. Given his resemblance to Uncle Sam, Coltrin named his new cereal after the mythical patriotic character. The top-hatted silhouette of 'Uncle Sam' on the side of the box is actually Coltrin's, or so the story goes."

My visiting Uncle Sam explained to me that while he was flattered to have his image on a cereal box (because Olympic medal winners have their images on other cereal boxes) he is concerned that folks will forget about his original mission and associations which (according to Forgotten Origins) is this:


"Uncle Sam is the culmination of a tradition of representative male icons in America which can be traced well back into colonial times. The actual figure of Uncle Sam, however, dates from the War of 1812. The setting was ripe for a figure such as Sam at that point. Previous icons had been geographically specific, centering most often on the New England area. The War of 1812 sparked a renewed interest in national identity which had faded since the revolutionary war.

"Like many mythological and symbolic figures, Uncle Sam has origins in actual fact and, in this case, an actual man. Born in Massachusetts, Samuel Wilson settled in the town of Troy, New York. Known locally as "Uncle" Sam, he would be the impetus for a regional saying which would eventually become a national icon."

I am grateful to my visiting Sam for leading me to sources informing me of these details! After all, new knowledge is a great way to begin the 1/2 year! Moreover, come this November, if I see Uncle Sam in the famous annual  Macy's Thanksgiving Parade (as I did last year when I took the following photo-ops) I will have a deeper appreciation for his roots! 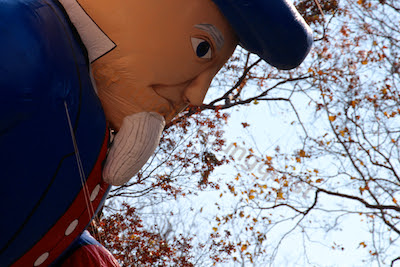 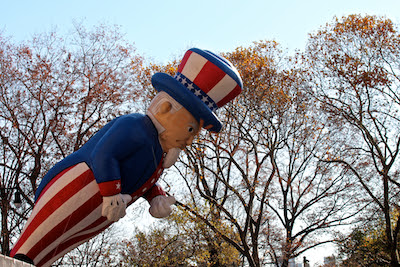 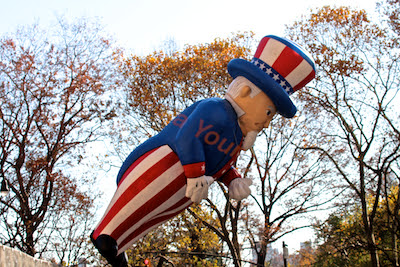 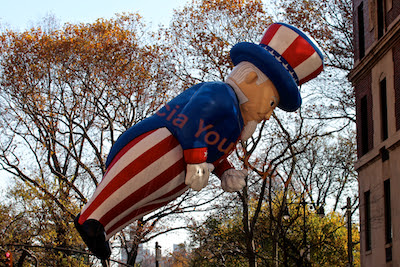 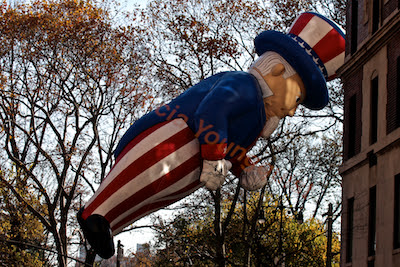 And, dear reader, I leave you with this info but not before — once again — wishing you a HAPPY 1/2 YEAR!