RAIN or SHINE Dining for my Wild Bird Visitors! 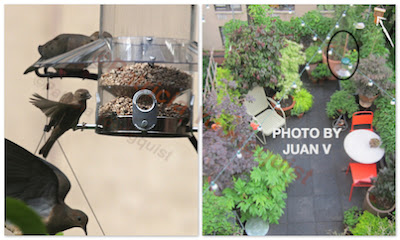 It has been one week since Juan V and I last worked together in my garden, which was the day after I had devised a way to hang my CB feeder in a place where the kiwi vine's foliage would be protected from serving as a placemat (which was a "story" I included when I "introduced" the CB feeder here on Blogger).

The collage posted atop today's entry features a close-up of my CB feeder to the left, and, on the right it features an aerial view (taken by Juan V) of how it appeared in its new locale the last time Juan V was here.

In an entry published on June 12th 2013 (the day after Juan V left), I "reported" — here on Blogger — on my scenario of the rehanging of the CB feeder, and I concluded that entry by stating, "stay tuned, as there is still a follow-up "story" surrounding this which I will post within a week's time," and today I am here to tell you of the follow-up story as promised!
If truth be told in chronological order, the event I am covering today happened before Juan V's visit, and it is the event that prompted my ultimately hanging the CB feeder in its new locale!

But before I get to that, let me remind you, dear reader, of something that you may already have surmised from my posts about my visiting cardinal couple (Cam as well as her beau Mac): I truly enjoy their company; and I strive  to make accommodations (feeders) where they can avail themselves of food with ease. And I had hoped the CB feeder would be one such feeder! For I have said in prior posts that I had thought by lowering the canopy of it, the smaller birds, such as my house finches, and cardinal couple, could eat in peace: without competing for food from my larger birds such as the occasional common grackles and mourning doves! And even though the smaller birds were the only sized ones who could ultimately avail themselves of the food from there, as you know, Cam and Mac stayed away from the CB feeder entirely; even though it was "designed" for them!

Therefore, whilst I was researching for alternative ways for places to hang it, I came across a slogan that truly spoke to me which is: "Nature happens. We cannot MAKE natural things happen (or NOT happen)."

Upon reading it, I laughed at my efforts re the taking care of the "things" I grow in my garden, as well as accommodating those who visit it! And the truism especially brought to mind my seemingly never ending mission to procure a feeder that would satisfy Cam and Mac!

As it turned out the aforementioned slogan is from a place that sells — you guessed it — bird feeders! Therefore, I contacted the place to tell them of "my plight" with Cam (as well as Mac), and was informed that perhaps the perches of my feeders had not been one to my cardinals' liking!

Since I could only view the feeder via a virtual tour, I had no idea that it was "tower" shaped like my CB feeder and was left with two feeders that I did not have a place for! I phoned the place where I had purchased the feeder, hoping they would give me some pointers on how I might secure it but was told, "If I were you, I would have thought of that before I bought it!"

FYI, dear reader, just an aside, I never liked the expression,"If I were you," because if the proprietor of WBUSS "were me," she would have done exactly what I did. Better she had said, "If it were me, I would have thought about where I planned to hang it, before I bought it . . . "

Be that as it may, after my fruitless convo with her, I came up with my brilliant idea of using the pole of a broom as a stake from which to hang either feeder, and inserted it into my kiwi vine's container: a "device" which I wrote about in my aforementioned 6-12-13 post, where I featured the CB feeder but not the WBUSS one out of my desire to simplify both of these entries. 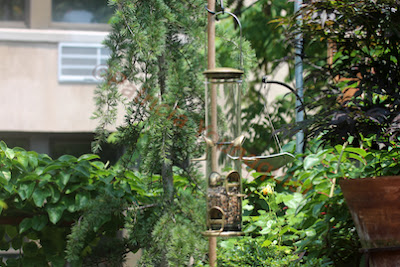 The WBUSS feeder is an attractive addition to my garden, and it must be nice for the folks who live in the apartment building (their window can be seen in this image) that overlooks my garden. However, neither Cam, or Mac, in spite of having access to a feeder with a perch to meet their needs would not nosh from there!

The finches seemed comfortable feeding from the WBUSS as seen below, 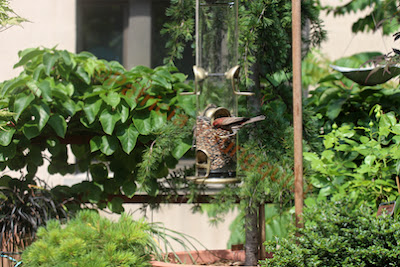 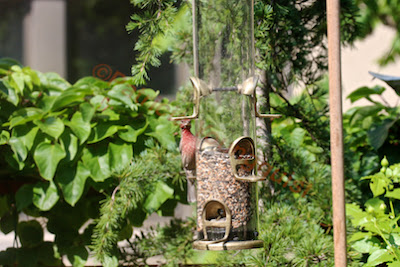 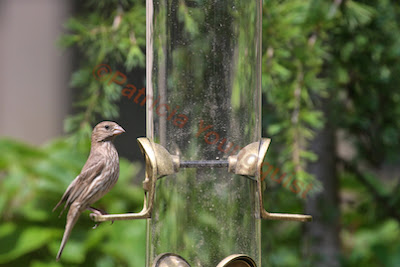 even whilst the mourning doves did their standard behavior of staring-at-others-eating from a feeder they can't access, which you can see in the images below. 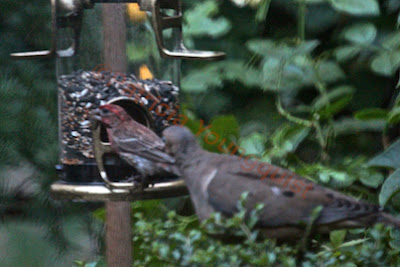 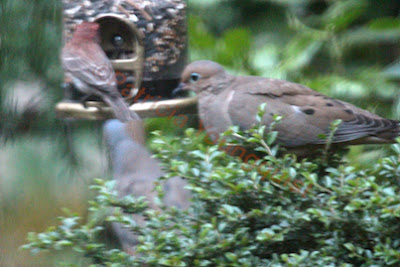 And the bluejays checked out the WBUSS feeder too, as seen below, 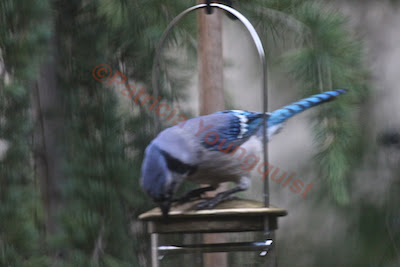 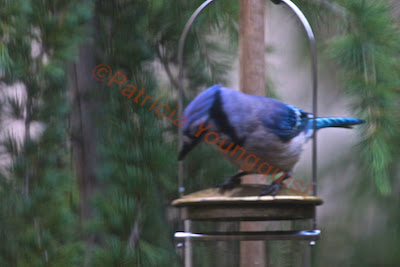 but Cam and Mac stayed clear of the WBUSS: preferring to scrounge around on my garden's surface, and nibbling on crumbs that had fallen to the floor, 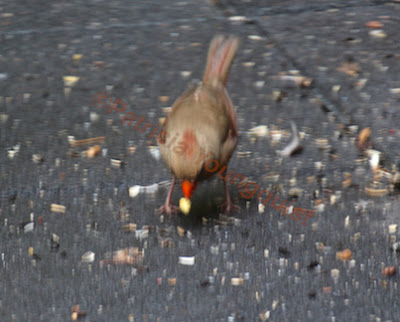 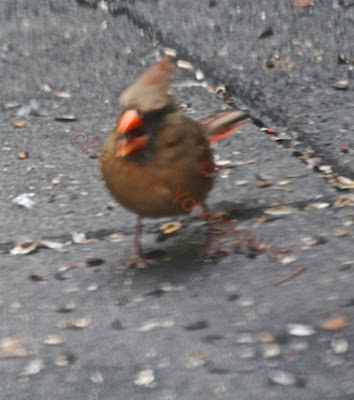 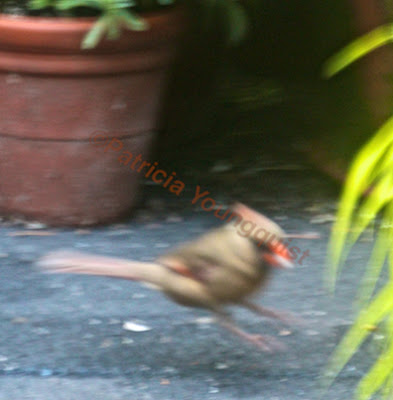 or eat from where "crumbs" have been dropped in to the containers of the things I grow! 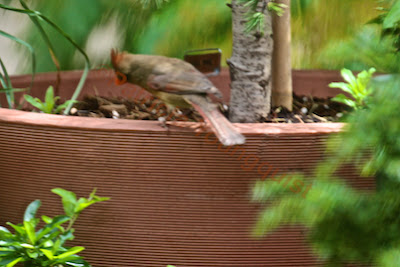 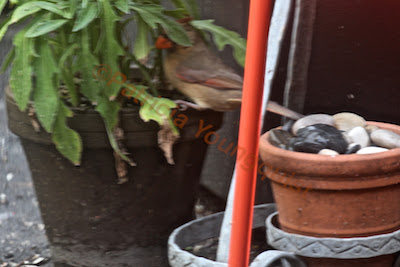 And while Cam continues to be satisfied eating this way, I've not seen Mac for a few days!

In any event, what's a gardener/birder to do with only one "working pole" from which to hang two tower-style feeders?

Switch them around in rain is the answer! 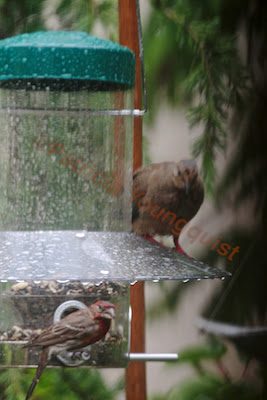 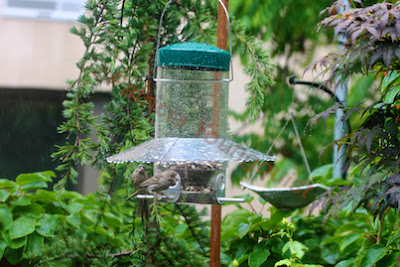 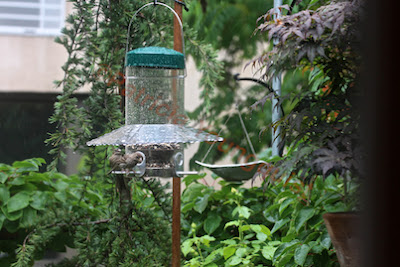 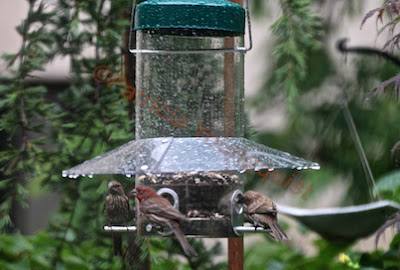 Then switch them back in the  shine! 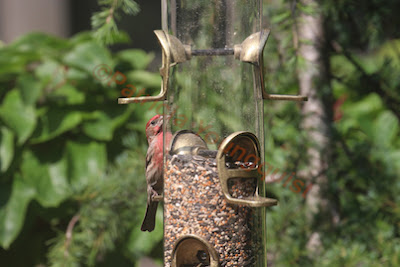 And because we have had a number of days with rainfall that has beaten the record for the day (as you might surmise from a photo-op of a couple of my visiting bluejays posted below), 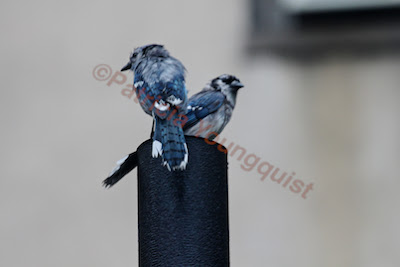 my rain or shine feeding stations will be welcome to some of my feathered friends, who will — no doubt — drop seeds that Cam will eat once "they fall to the floor!"