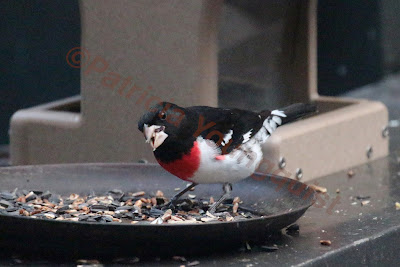 A few days ago, April 18th 2013, I heard a wonderful voice singing in my garden, and as it happens, the voice belongs to the handsome guy featured in the image above today's blog entry. This little fellow is a rose-breasted grosbeak; although I did not know that at the time, and at first I mistook him for a hairy woodpecker because that type of bird has been an occasional visitor to my garden (which I've discussed in my other on-line venues, including a post here on Blogger which you may refer to by clicking on this link).

In any event, I was so awestruck to see this creature that I immediately posted a photo-op (different from the one seen here) on TLLG's Pinterest Boards as well as on TLLG's Facebook Page, where one of my followers, Evelyn E, someone I've never met, pointed out to me that this uncanny little fellow may not be the hairy woodpecker as I had initially thought.
I looked at many sources on google to determine this guy's identity and I also reached out to a high-end bird shoppe that sells exotic birds as well as The Wild Bird Fund to no avail. Ultimately I emailed a photograph of what was then a "mystery bird" to Bill B, a bird blogger extraordinaire, as he had been the one to help me identify my dark-eyed junco (you may refer to this in the comments field of a post pertaining to the dark-eyed junco). Much to my delight, Bill B answered immediately with the following info:

"Patricia, you have a beautiful male Rose-breasted Grosbeak. You are right about the beak. It is large and conical shaped. Gros means large. So, grosbeak is a large beaked bird. I am jealous! Here in central South Dakota it is too early yet for neotropical migrants like the Rose-breasted Grosbeak. Another month or so and we will have birds like that here."

I was thrilled and grateful to receive this info, and even though in a recent post (here on Blogger), I stated that at one time "I followed Eric Berne's philosophy which was this: 'The moment a little boy is concerned with which is a jay and which is a sparrow, he can no longer see the birds or hear them sing,'" I am  now thrilled to learn a given bird's identity so that I can learn more about them and better meet his/her needs.

Moreover, I was not the only one who was curious about this newcomer. A lone mourning dove blatantly stared at him as seen in the images below. 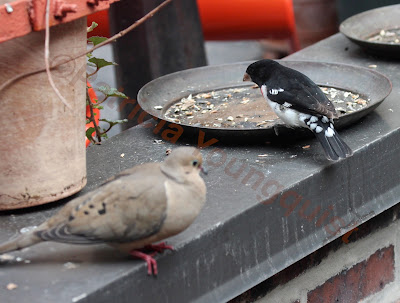 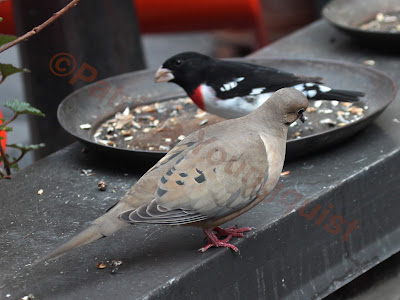 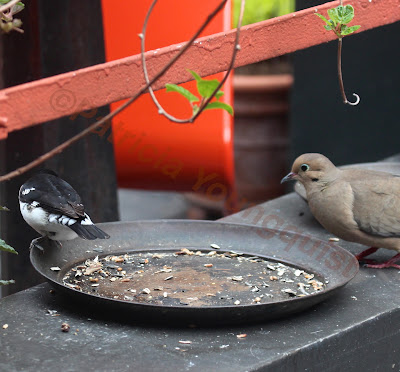 And Cam, my famous female cardinal, seemed to have the same reaction as you may surmise from the images posted below.

But the house sparrow didn't waste his/her time staring at the newcomer, he/she just went about business as usual (which is noshing) as seen in the images below. 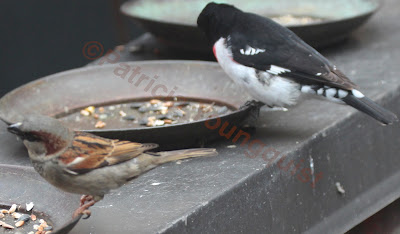 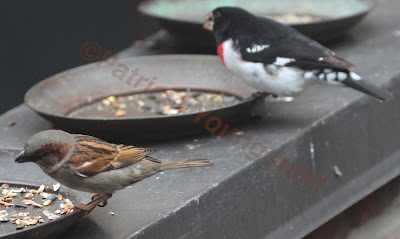 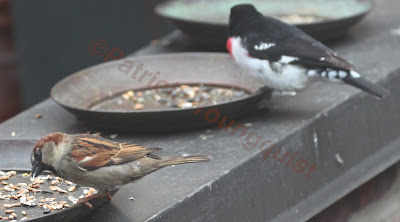 And I also went about some business as usual (which is researching) and discovered many interesting facts about my newcomer, the rose-throated grosbeak including the following "article" (by Tait Johansson) excerpts from a web-page for the Bedford Audubon Society.

"One of the first Neotropical migrants to arrive in southern New York every spring is the Rose-breasted Grosbeak (Pheucticus ludovicianus). In late April, this species completes its journey from its winter range (Mexico south to Ecuador) to our area, announcing its arrival with an enthusiastic-sounding, liquid, robin-like song. A fairly common breeding species in the area, Rose-breasted Grosbeaks frequent open woods, wood edges, orchards, and yards with deciduous shade trees and shrubs. They will sometimes visit feeders, often for sunflower seeds.

"The name “grosbeak” comes from the French word grosbec, meaning “large beak,” and indeed both sexes of this species have a large, stubby, powerful bill, colored a dull, pale pink. This bill, designed for crushing the shells of seeds, is capable of exerting tremendous pressure on anything it clamps down on, as anyone unfortunate enough to have had a reason to handle a Rose-breasted Grosbeak can vouch for. (I can tell you that taking one out of a mist net is an experience not soon forgotten.) Beyond the birdbander-scarring bill they share, the male and female bear little resemblance to each other, and might easily be mistaken for two separate species.

"The male is a boldly patterned bird, mostly black and white, with a black head, throat, and back. The upper surfaces of the wings are black with two white wing bars and a crescent-shaped white patch at the base of the primary flight feathers. This patch is quite noticeable in flight, though it is mostly concealed when the bird’s wings are folded. The tail is mostly black with some white in the outer tail feathers. The rump and underparts are mostly white, except for a buffy area on the flanks with some fine dark streaking, and a triangular, bright pinkish-red patch on its breast. The bird in flight reveals equally startling pinkish-red wing linings. Together, the male’s bright colors, thick bill, and rather stubby wings vaguely remind me of a small parrot."

The following images confirm that my new visitor, the rose-breasted grosbeak, has the stunning characteristics attributed to this magnificent bird. 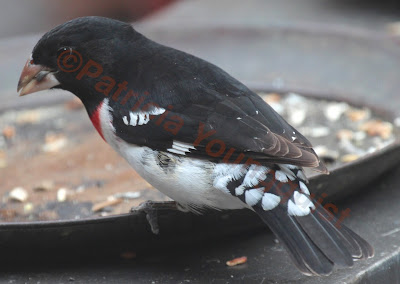 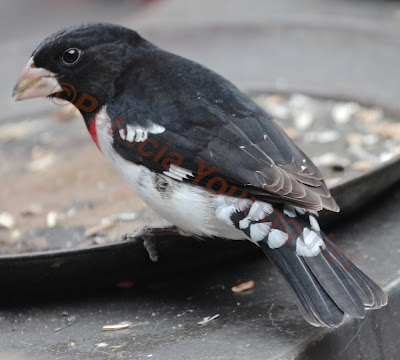 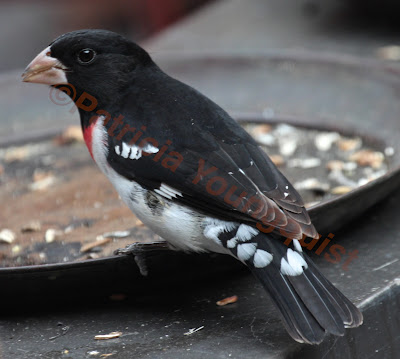 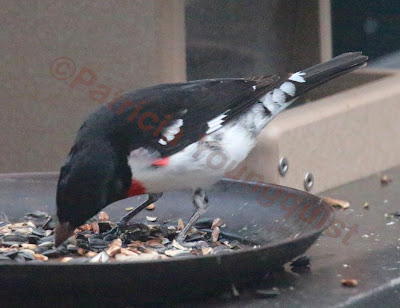 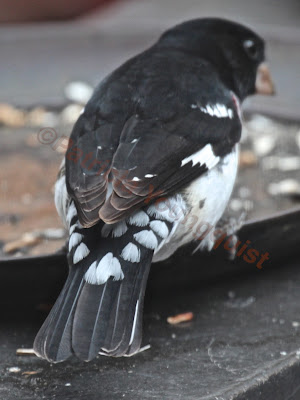 And it looks as if I will have to update my collage card posted below, 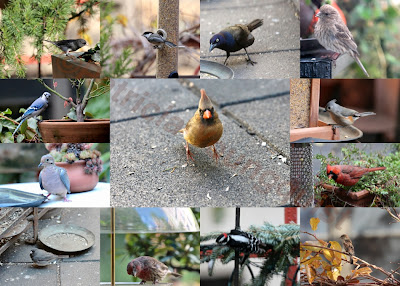 to include the rose-throated grosbeak!

Meanwhile, after an exciting morning and afternoon learning about the rose-breasted grosbeak, another unexpected guest appeared and perched himself near to where he had dined all day (as seen in the image below). 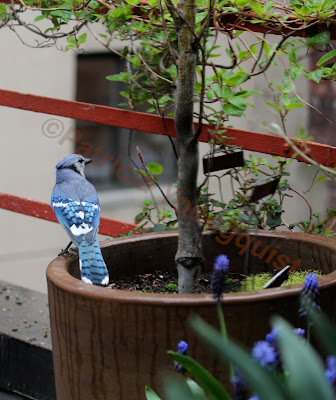 This particular unannounced guest, as you can see, is a blue jay, I don't recall seeing blue jays in my garden since October and have now learned that blue jays prey upon rose-breasted grosbeaks! And I pray that the blue jay does not harm my new friend. And with that thought, I ask you, dear reader, to also pray about my new pal's well being but not before leaving you with two more images which are posted below. 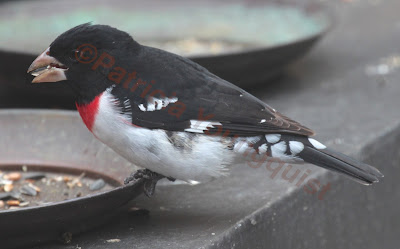 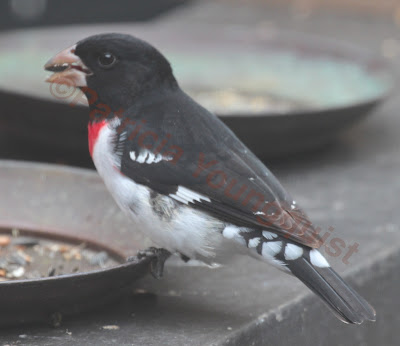 ADDENDUM: I no longer actively produce event program covers, invitations and greeting cards, but arrangements might be able to be made under certain circumstances.

My focus is on the Words In Our Beak book series, whose stories are told from the point of view of Cam, a female cardinal. Words In Our Beak’s goal is to open readers to a simple understanding of the winged world and their environment. Set in my rooftop urban garden in New York City. Words In Our Beak is directed to children and adults who are curious about birds, and want to learn about them from a unique perspective. The books include hundreds of images of flora and fauna, links to movies, as well as to informative narratives that have been created by the author.

At this moment, May 2018, both volumes one and two are in hardcover format (as seen below) and are available wherever  books are sold.

*Here's the  purchase info for the Words In Our Beak book series: