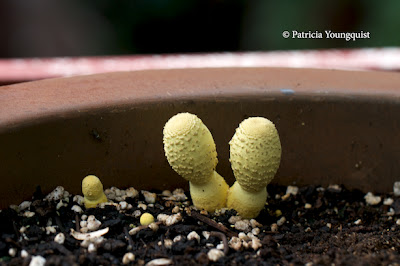 Today's entry here on Blogger is part two-F of a series of posts pertaining to a year-end review for special occurrences in my urban garden for the year 2012 (the schedule for this series is described in part one as well as part two-A of this topic) and in today's entry I will be reviewing the month of August for the year 2012.
In 2012, on the first day of August, my Avellana corylus (AKA Contorted Hazelnut) did not give to me a partridge in a pear tree, rather he gave to me a mushroom family! The father and mother mushroom with their two children, an adolescent, and a teeny little baby, can be seen hanging out in the contorted hazelnut's container in the image atop today's blog entry.

Mushrooms had visited my garden in 2011, but not until August twenty-third of that year, so like the things I grow here that bloomed earlier than usual, this family of mushrooms was ahead of "schedule."

And, two days later, their cousins came to see them, making themselves at home in the container which "houses" my Sweet Autumn Clematis AKA Donna's Legacy). An image showing a couple of these "relatives" can be seen below. 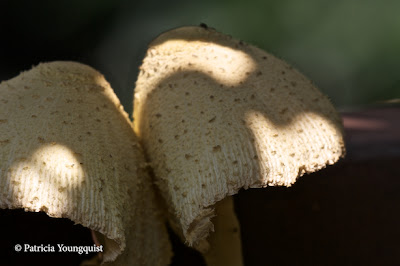 However, mushrooms were not the only returning visitors to my garden the first week of August 2012, for a "lone" finch as seen below graced my garden with a visit and she can be seen in the image posted below. 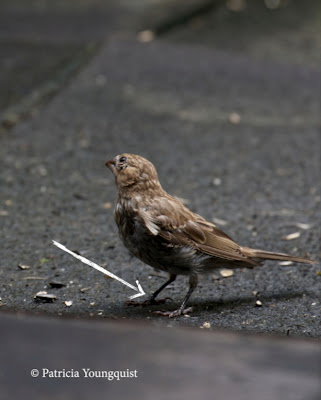 The arrow which I've added points to an "ankle bracelet" which she was wearing on  that day, leading me to believe she had either escaped house arrest; or that she was getting an early start on wearing bling for New York City's Fashion Week.

Admittedly, the bracelet is hard to distinguish in this particular image but when this sweet bird returned in September of 2012, I happened to get better photo-ops that "capture" her ID-bracelet. I indicated the bracelet by adding arrows to each image, and they are posted below. 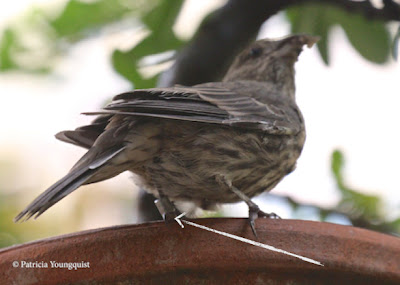 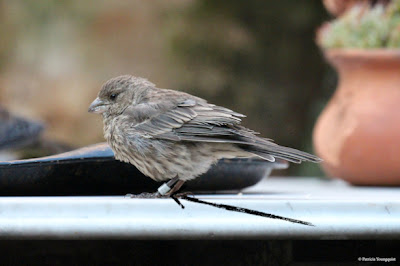 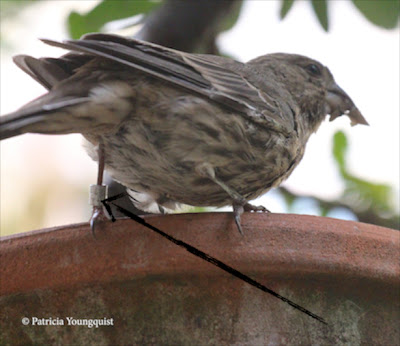 And I did post a "story" about my visiting finch's bracelet on tumblr which you may read by clicking here, but since the aforementioned is September 2012's news, and this particular blog entry concerns itself with August 2012 garden news, I'll return to that topic by presenting you the first aerial views of August 2012, which are posted below. 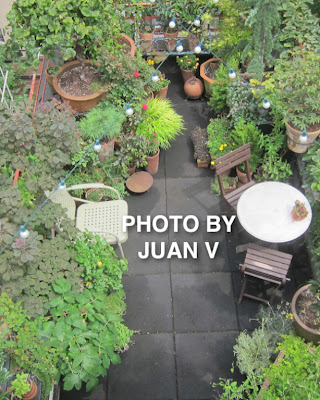 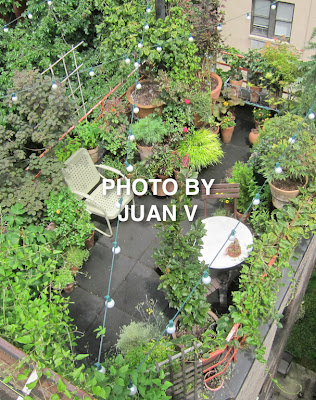 They were taken by Juan V on August 7th 2012, after he and I had worked in my garden for the first time since July 24th of 2012. The first image shows the view he always captures, the south to north view, if one is standing at the area in the bottom of this image. The second image shows the same vantage point, however, in the lower right corner, the foliage you see belongs to my Autumn Clematis, which is usually not this lush the first week of August. A detail of this can be seen at the righthand side in the image below. 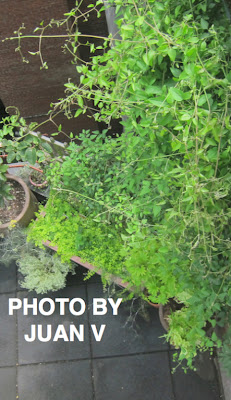 Juan would be returning in August ten days on August 17th, and the following are a few photo-ops of just how some of what I grow fared during his absence. 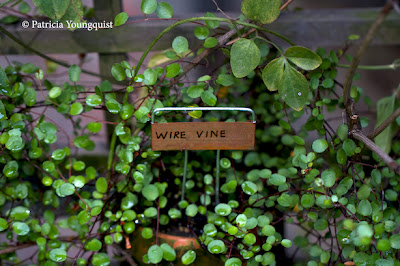 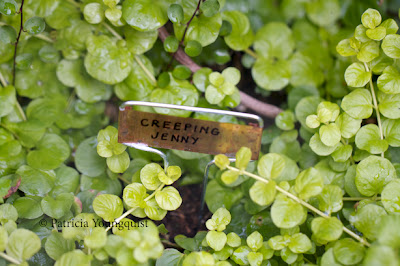 And while some visiting birds also appeared in the time period of Juan V's absence, unfortunately, Cam, my beloved cardinal who first visited me in July of 2012 as I stated in yesterdays post, was not around during that time but the house finches seemed to enjoy nibbling as you can see in the images below. 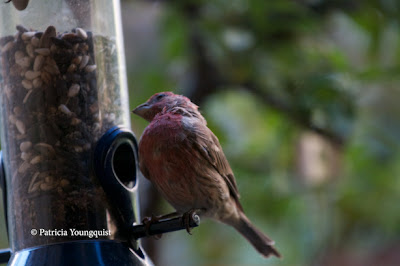 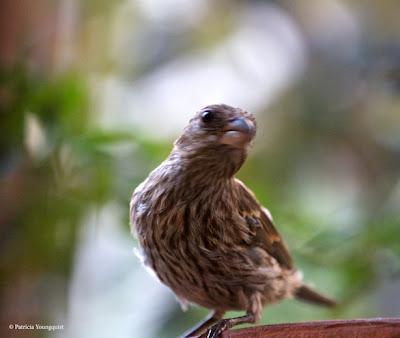 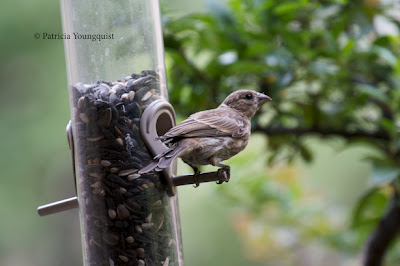 I have a number of  other images of "my" visiting birds enjoying "THEIR" feeder on one of my Pinterest Boards, which you may view by cliking here.

Food was not the only thing the finches enjoyed in my garden, they also made themselves at home by "sitting" in (or on) chairs in my garden as seen in the images below. 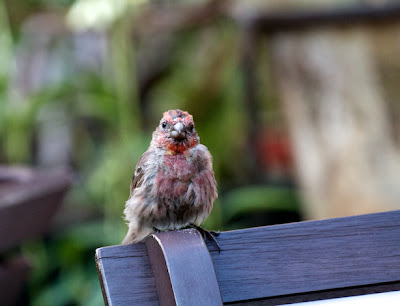 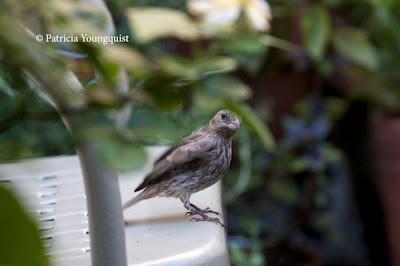 The latter of the images is one you my recognize, dear reader, as I included a very similar one in my post re April 2012's "events," the month I received the bouncer chair from Mulberry Street, a chair which my house finch is enjoying!

In any event, when Juan V returned on August 17th 2012, he took the following photo-ops. 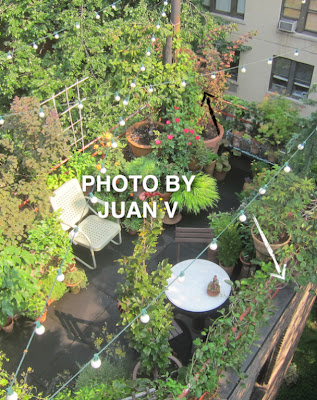 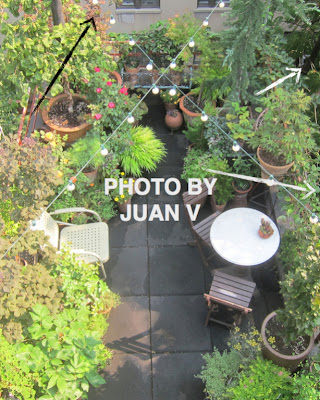 And while everything may look lush in these two images, the fact is I was begining to have trouble with both Physocarpus opulifolius AKA Coppertina Tree (which has been indicated by the black arrow in both images), as well as my Actinida Kolomikta and Actimda (AKA Kiwi Vine), indicated by white arrow(s) in both images.

For as you may recall, in my entry for the review of events in my garden for May 2012, a review which was posted on January 9th of 2013, I informed you that Juan V and I had had to repot my coppertina tree into a larger container, something we had done only one year prior!

And as we repotted in May 2012 for the second time in a year, Juan V and I determined that it might not be content for too long and that I should prepare myself for taking it out of my garden, and now, after only a little over three months had passed, I was looking at having to say goodbye to my coppertina as it needed much bigger space than I could offer it to meet its needs!

Moreover, the mildew, which we detected in July of 2012, had been attacking things I grow and was now causing damage to my kiwi vine and putting stress on its ability to produce healthy foliage; there was even reason to believe, that in spite of everything we'd done to meet this vine's needs when we potted it in a new container (as mentioned in a previous entry re my review series here on Blogger)! There was no treatment I could give the kiwi to prevent the damage from spreading!

And that's how the month of August for 2012 ended re what grows in my garden, causing me to once again (as I had re July's garden activities)which was for me to question , the author T.S. Eliot's observation that April was "the cruelest month."

At least I received some consolation when Cam returned and allowed me to take a number of photo-ops which can be seen below depicting the way she looked in late August of 2012. 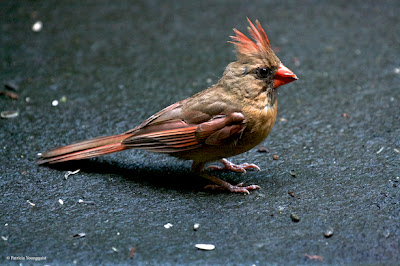 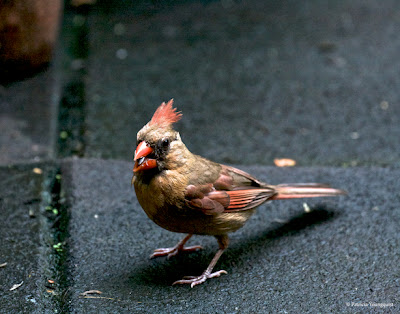 Since that time, I have taken a number of photographs of her using a better camera as well as a lens that won't deter her from mugging for the camera. A number of these images are on one of my Pinterest Boards. That board is titled Birds in my Urban Garden . Other images of her have been included other entires here on Blogger and in some of my posts on tumblr. Moreover she's a "regular" on  TLLG's Facebook Page!

House Finches also frequented my garden during this time period and when they weren't noshing, or "sitting" in the chairs in my garden, they hung out on the string lights above my garden as evidenced by the images posted below. 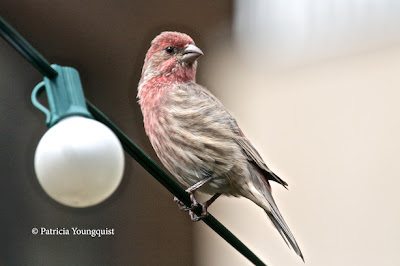 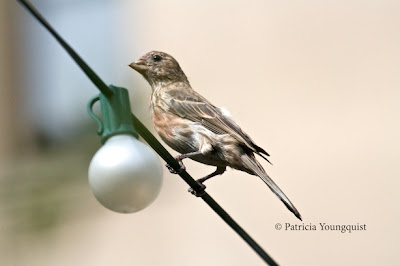 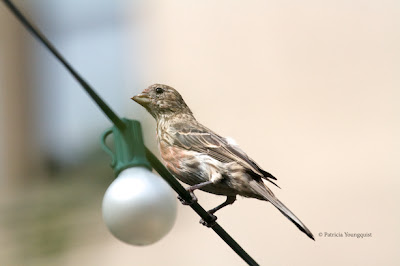 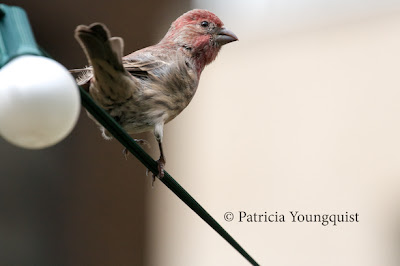 And like Cam, the house finches have a place in my heart and in my on-line venues! More images of them are featured on my one of my Pinterest boards which is titled Birds in my Urban Garden . Other images of them have been other entries here on Blogger and in some of my posts on tumblr. Moreover they have appeared on my TLLG's Facebook Page!

The birds seem to be quite supportive of what grows in my garden and I think they were concerned about the fate of my kiwi vine, for it is written, "where two or more are gathered .  . .,"  and gathered two were — atop my string lights (seen in the image below), as they too wondered what Juan V would find in the garden wen he returned in September of 2012! 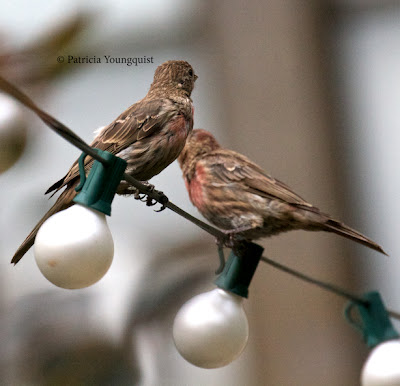 And, dear reader, as I close this post, I have a question for you and that is this, do you think that I am correct in my "observation," that the months of July and August (in urban gardens) can be "the crulest months" as our "friend," T.S. Eliot equated with April?
Posted by The Last Leaf Gardener