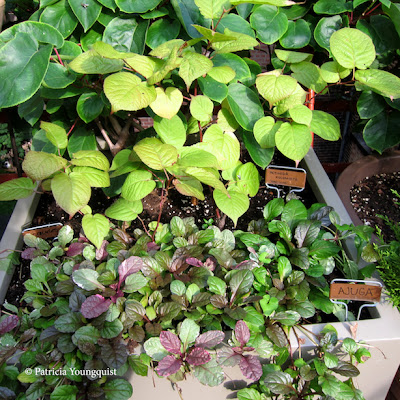 Today's post is part two-D of a series of posts pertaining to a year-end review for special occurrences in my rooftop garden for the year 2012 (this series is described in part one as well as part two-A of this topic) and in today's entry I will be reviewing the month of June for the year 2012.
The image atop this entry is a partial view of my Actindia kolomikta and Actimida (AKA Kiwi Vine) accompanied by some Ajuga (which had been recently added to the kiwi vine's new container).

As you my recall from yesterday's posting which covered the month of May for 2012, Juan V and I were forced" (by the kiwi) to find a new home for it because it was growing as if it had taken a dose of performance enhancing drugs, and it took a lot of "detective work" to find a container which would meet the kiwi's needs.

The image was taken by yours truly on the first of June in 2012 and "proves" how well the kiwi adjusted to his new "home!" I was very grateful for this, for as you might know, sometimes things take a while to adjust and even go into shock which interrupts their growing process.

But this was not the case for my kiwi, for in less than a month's time it was thriving as if nothing had happened as evidenced by the image atop this entry as well as the images directly below this paragraph. 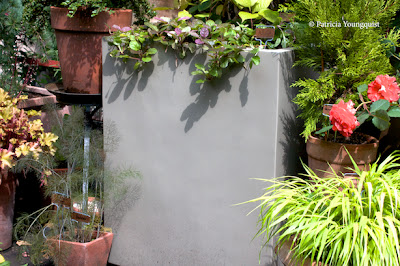 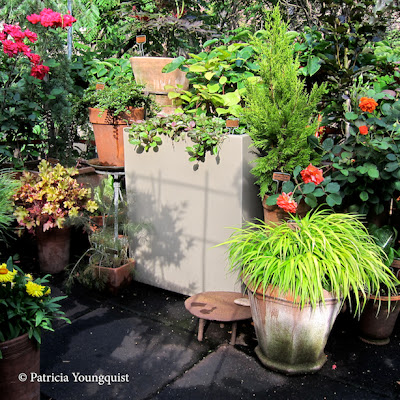 But even though both the kiwi and the ajuga flourished in their new location, I was not content with the appearance of their container as it did not fit in with the "decorating scheme" in my garden and I did my best to make the container not stand out so much by placing various flowers, grasses and plants around it as seen in the aforementioned image.

Also, the kiwi was not the only resilient "member" of what I grow; much to my surprise, some oxalis which at one time had been planted in a container where I now have Creeping Thyme, seemed to have risen from the dead, making its way up through the thyme's delicate foliage as told in a "story" on my tumblr pages and as seen in the image below. 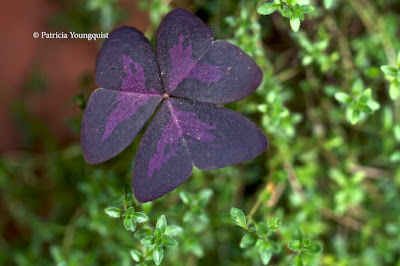 But, meanwhile, besides my "mission" to downplay the girth and texture of my kiwi's new container, I was also on a mission to see if the hummingbird Juan V saw in my garden (when he was here in May of 2012) would return.

I had been told about the nectar hummingbirds like to have when they can't get it directly from Mother Nature and I put some in feeders that I'd placed in the containers of some of the plants, such as Heuchera 'Marmalade' (due to its tubular flowers) as well as Echinacea, which humming birds are known to enjoy.  If you'd like, you my read about my specific efforts re this, on my tumblr pages, but meanwhile, it can be seen in the images below. 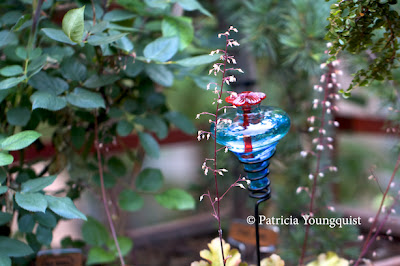 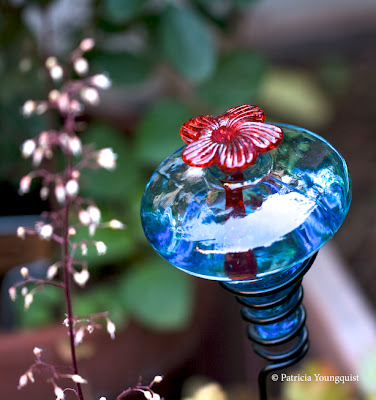 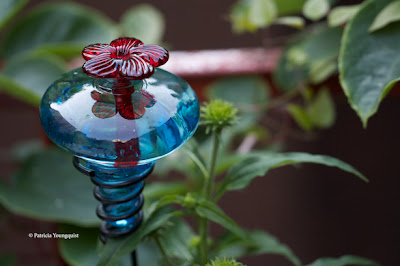 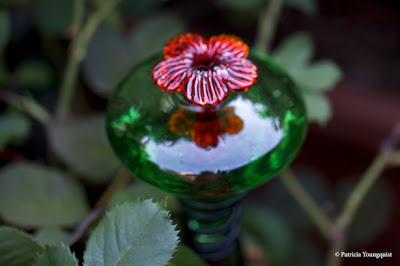 As you can see in these images, my feeders had red tops, I chose these because I had been informed that hummingbirds are attracted to the color red! I was also told to tie red ribbon in various places throughout my garden and I complied as evidenced in the images below. 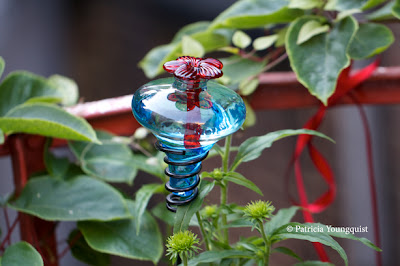 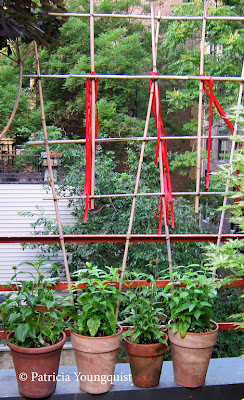 However, in spite of growing things which hummingbirds enjoy, providing them with nectar, and hanging red ribbon throughout my garden to welcome them, to my knowledge, they never returned. The bees that had been here last year as of the first week in 2012 had not returned either!

But I did have some visitors: a common horsefly and a grasshopper as seen in the images below: 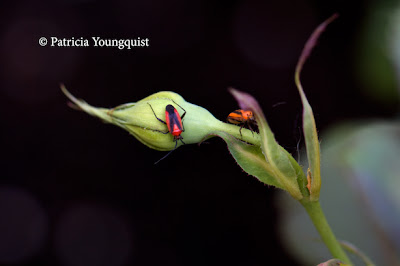 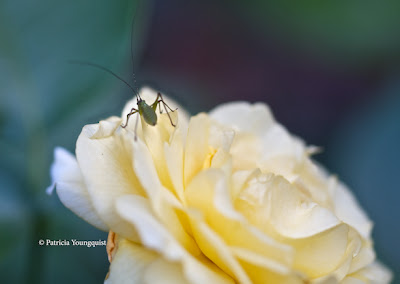 And be that as it may, whilst my endeavor re attracting hummingbirds may not have succeeded, I did find a solution to minimizing the appearance of my kiwi's container — have it painted, which I did (with some help) on May 10th — two days before Juan V was scheduled to come as I wanted to surprise him.

Painting a container that has a vine such as the kiwi dangling over it as well as an ajuga plant draping over its edge is rather tricky, but to protect the things I grow from being painted, I used chopsticks to keep both my kiwi and my ajuga out of harm's way! My method or madness can be seen below. 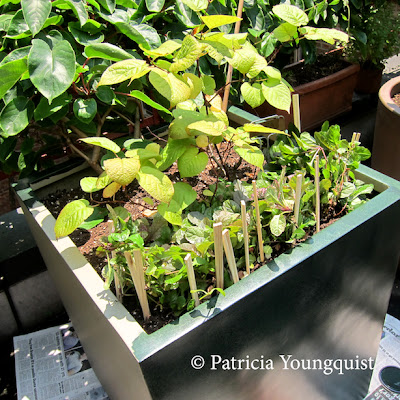 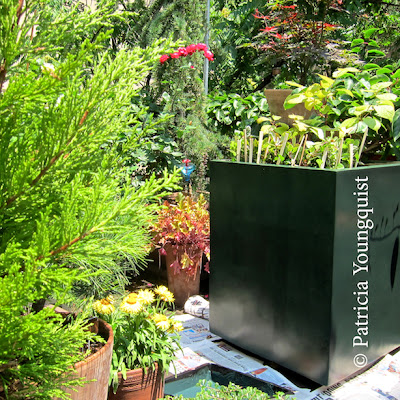 My having chosen the Black Forest Semi Gloss paint proved to be a good choice to use for the kiwi's container as you can surmise from the aerial view (pictured below and referenced with a white arrow) Juan took of it two days later when he came to help me with June 2012's yard work on the twelfth. 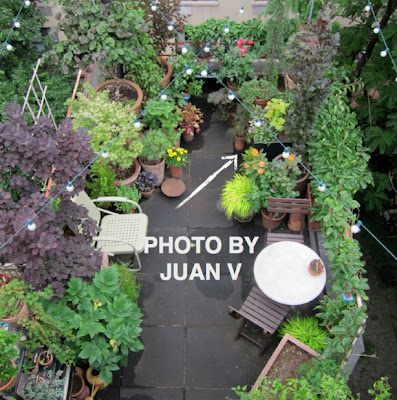 Moreover, I began another attempt at attracting birds to my garden by hanging a feeder in the southwest corner. Juan V captured this in an aerial image below with a white arrow pointing to the aforementioned feeder. 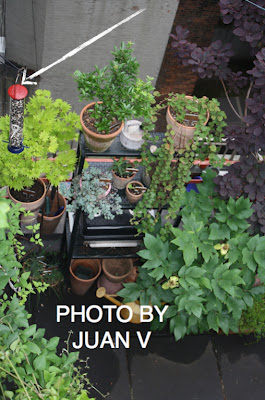 And that day we  also planted a set of wire vines — quintuples — and  it was our hope that the wire vine would trail up the trellis behind the are where we placed them. The container of wire vines can be seen in the image below where they span the length of the space behind the double arrow in Juan's aerial image below. 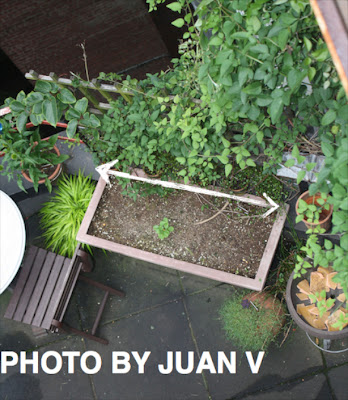 And, in the event that you are unfamiliar with wire vine, dear reader, the following are images taken by yours truly to show you a couple of my wire vines as they looked a few days after Juan took the aerial image in June of 2012. 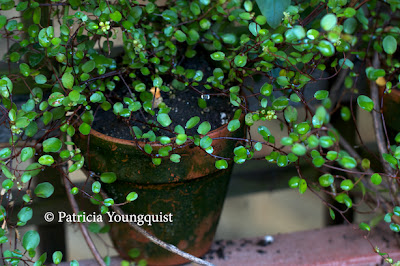 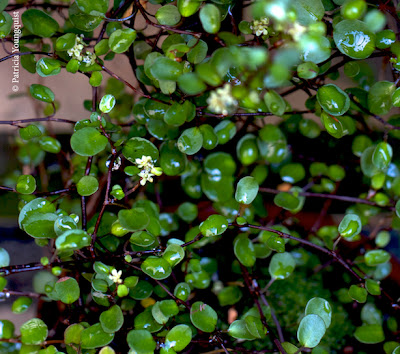 Juan did not return until June 26th of 2012, and in the interim, there were a lot of "entrances and exits," by the things I grow and I've selected a few photo-ops from their "scenarios" which are posted below:

And some "folks" here just curled up like a cat and took a nap in the heavy rains as seen below:


Moreover, in between Juan's visits here, feathered friends (mostly house finches) enjoyed the feeder he had hung as seen below. 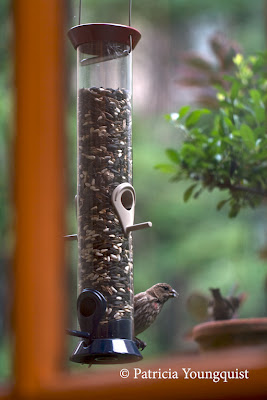 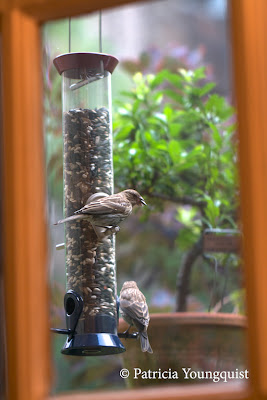 It was the end of June — six days after the 2012 summer solstice — June 26th of 2012 when Juan returned and he was amazed how well my kiwi vine and ajuga had adjusted to their still fairly new and freshly painted home — as evident by the photo-op I took of it on that day, which is posted below. 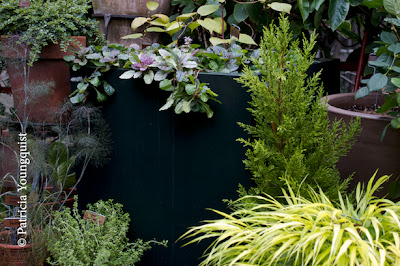 And this about concludes my review for the month of June in 2012, I'll leave you with Juan's aerial op of it and see you tomorrow for my July 2012 review.