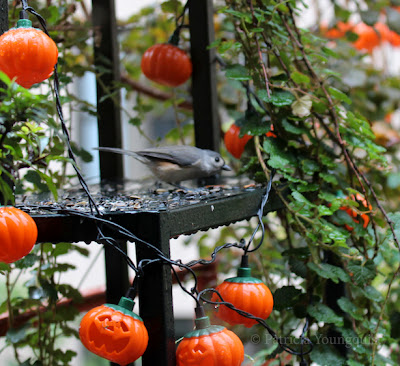 Today, October the Thirtieth, or rather the eve of today, is what is known as Corn Night or Mischief Night, and according to Holiday Insights, “Mischief Night appears to have roots in England back to the nineteenth century.” It occurs the night before Halloween and typical acts on this day include, “soaping windows, egging houses [as well as] cars, tossing a few rotten tomatoes, toilet papering house trees et ceteras, (and) knocking on doors, then running away.

I never really understood honoring mischief, but even if I did, New York City, where I live, has already endured enough “mischief” through the perils of Hurricane Sandy, which slammed us (and our surrounding areas) yesterday, which is why I did not post here on Blogger, which is normally what I do on Mondays.

Sandy wreaked havoc, which has resulted in (among other catastrophes) power outages, including damage to a back-up generator at a prestigious New York City hospital, causing them to have to relocate all their patients by ambulance to other hospitals!

All over the radio folks are being encouraged (and some ordered to do so with a mandate) to stay home; yet, at the same time, we are being encouraged to share our photos and stories of how Hurricane Sandy has impacted us individually, which brings me to my posting here on Blogger today.

As you know, dear reader, normally on Tuesdays re TLLG’s cyber–space venues, if it’s Tuesday it must be tumblr, which is still the case, but in today’s situation, I will post my Hurricane Sandy experience, or rather the impact she has had on the birds which visit my garden, before sending you to tumblr (where I have plenty of new content).

Having recently prepared my garden for a major upheaval, I am no stranger to doing all I can to protect the flowers, herbs, plants, shrubs, trees and vines which grow in my garden. And also, I’m very sensitive to the needs of the birds that visit us, making sure that, when my garden is being disrupted, my birds are still able to eat, as they are accustomed to doing when they come here, including the baby blue jay seen at the top of this image, undaunted by my mischievous looking Jack–O–Lanterns, and unimpressed by the beauty of my Rubus calycinoides (AKA Creeping Raspberry or Ornamental Rasberry), which is “dangling” to his/her right.

The little bird’s main concern seemed to be how to eat in the pouring rain! I have heard that it is not too good for birds if their seeds become to soggy, so I began my prep for protecting their food from the rain (which was predicted to accompany Sandy) by putting some of it in a “saucer” below my table, as seen in the image below, with a lone blue jay looking at me for “reassurance” before checking out the situation as evidenced by the images posted below. 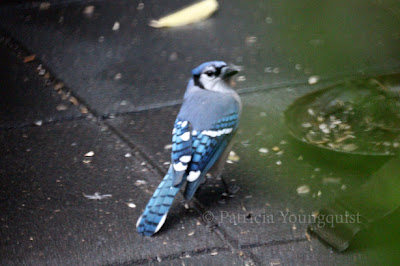 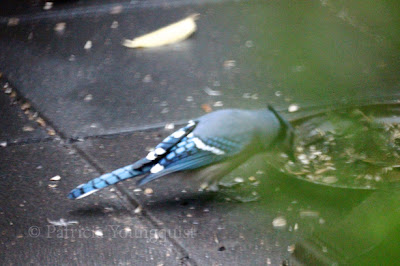 I also placed a saucer of seed under my bouncer-chair  as “discussed” on TLLG’s Facebook posting yesterday as well as on TLLG’s Pinterest Board for Birds. I had laid the bouncer-chair on its side in anticipation of Sandy’s high winds, and beneath the chair seemed to be a good spot to protect the food. A lone mourning dove seemed to agree and began noshing there immediately; however, a baby blue jay was a bit more hesitant and instead used the chair as a perch on which to contemplate the impending storm. Both of these scenarios can be seen in the images below. 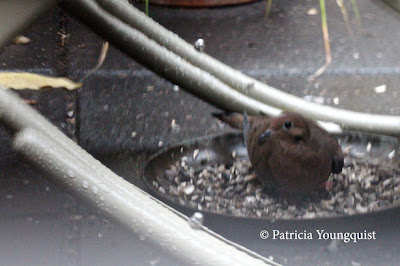 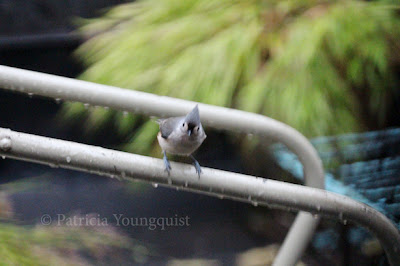 Even though their food was a little more protected than the food in the “tube hanger” which usually hangs near my door, as you may recall from previous posts and as you can see in the image below, 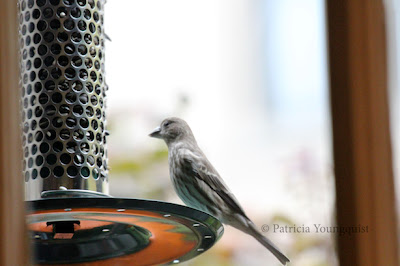 all of the birds seem to be a little apprehensive with a new arrangement for their food, and so I put my dome style feeder on one of my urban hedges (the one which is my garden shelving) so at least the dome would give some coverage for their food in a feeder they have been accustomed to, and as soon as I did, they immediately came and ate, as evidenced by a few photo–ops posted below.


As yesterday progressed, stronger winds and heavier rain prevailed (as well as flooding near to where I live), and it became apparent that I had to “upgrade” my Hurricane Sandy prep!

My friend Michael, who helped me get my garden ready for the “renovation” this past September, came over and together, in the wind and rain, we moved my bouncer-chair inside my apartment as it could have been swept away given the way that the winds were gaining momentum. I had already moved my table top inside my place, the table top I mentioned at the beginning of this entry, the table top that I hoped would provide “shelter” for my visiting birds’ food! And I had put the table’s pedestal near to the door to my apartment. Now, instead of having a “saucer” of food under the table, I set the dome feeder on the table’s pedestal, as the feeder could have easily blown off my urban hedge the way the winds were blowing.

Moreover, I untied the twine which normally secures my Rubus calycinoides to my urban hedge and moved the beautiful vine to the garden’s floor. At least the dome feeder was now in quick reach if it needed replenishing or if weather conditions warranted moving it all together. The birds seem to adjust to my moving the feeder once again, which is evidenced by the images below, where the mourning dove was so enthusiastic, he/she jumped for joy before partaking in her snacks! 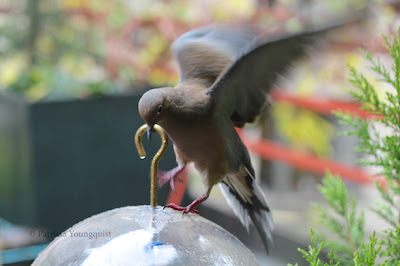 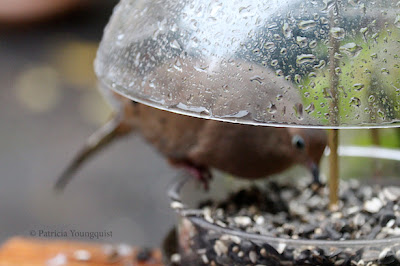 However, regarding feeding my birds, the location where to I should put the dome feeder during the winds and rains brought on by Sandy was not the only concern. It was a no-brainer that the tube feeder had to be moved from the bracket that it normally hangs on. The birds are used to me moving the tube feeder to different places in my garden. In fact, I often put it on top of my table, as seen below. 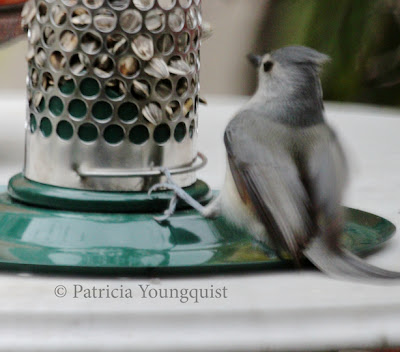 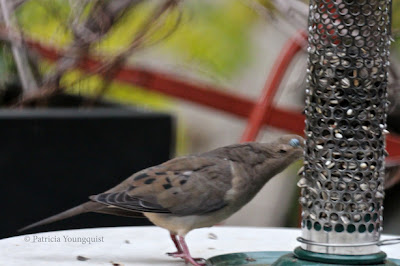 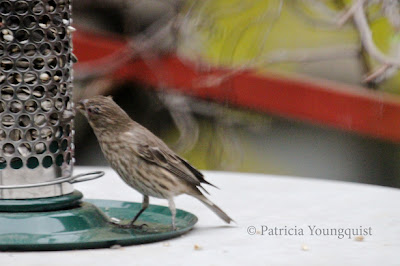 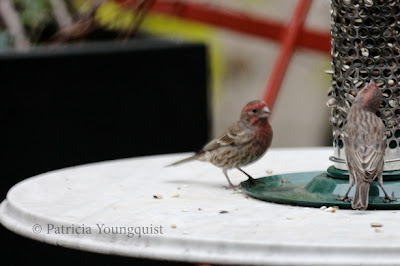 And most recently I did this to keep one of my Jack–O–Lanterns, company as he enjoys watching birds eat from it. 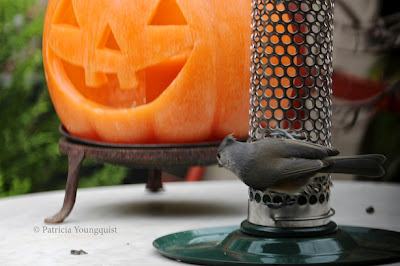 But since my table had been dismantled and its pedestal was already being used for the dome feeder, Michael and I came up with the idea of putting my “fire–place” planter (a planter you may recall from a previous post or click here to refer to an entry which includes this awesome planter’s image and shows how it looked when “housing” my basil triplets as well as my ornamental grass known as Ophipogon planiscapus AKA Black Mondo Grass triplets), OVER my tube feeder, thus keeping the feeeder from blowing away. It proved to be a great move, as the birds were able to nosh and nosh and nosh even in the high winds and pouring rain as seen in the images below. 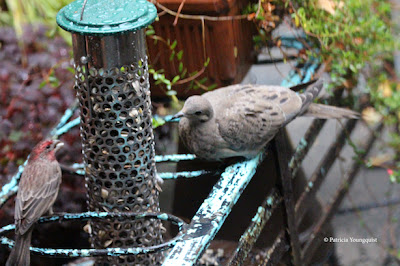 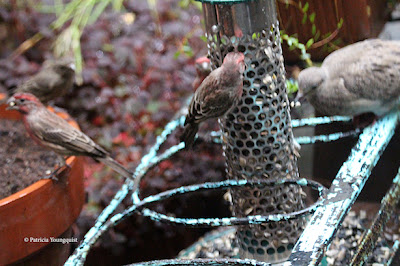 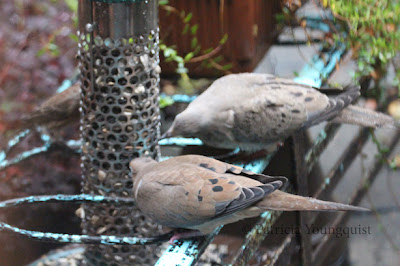 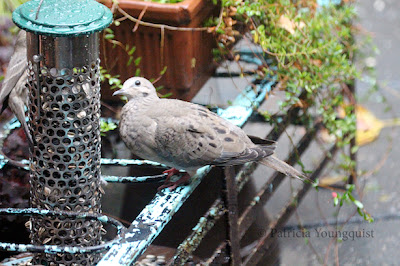 Today, in New York City, it seems that the worst is over; however many shops remain closed and those that are open have almost no supplies. Additionally, the subways are still not running and may not be able to do so for many days. The shutdown of mass transit does not seem to affect my visiting birds, for they are still coming here to nosh and nosh and nosh. However, none of us have seen or heard from Cam (a cardinal who usually visits me). Her last visit to my garden was ten days ago when she posed for the picutres below. 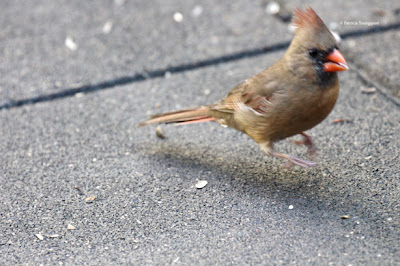 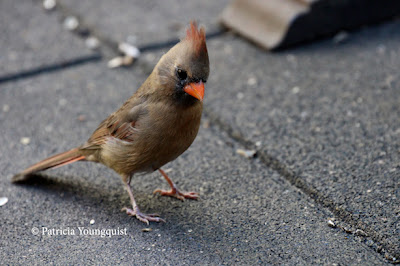 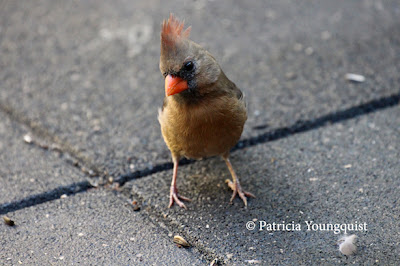 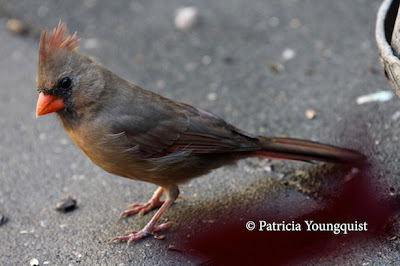 While I am not ready to put her picture on a milk carton, I am very concerned about Cam’'s well being, although she has flown the coop before but she did return, as you may recall from a previous post.

AND NOW WITHOUT FURTHER ADO, THE LINK TO tumblr IS HERE!
Posted by The Last Leaf Gardener