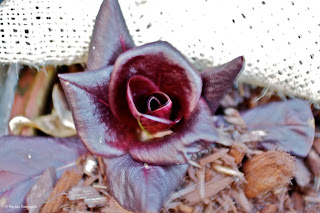 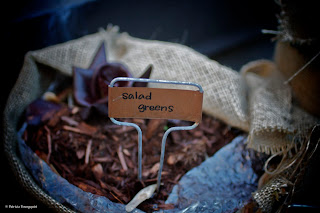 The things which I grow in my urban (NYC) terrace garden, and I, would like to wish you a Happy Groundhog Day. Today marks the point between the winter solstice and the spring equinox in the Northern Hemisphere (this day is celebrated on August 1st for those living south of the equator).

And, as you can see in the image posted above, one the salad greens that I grow here is poking his head out of his winter gear — throwing back his blankets of bubble wrap and burlap — to see if the groundhog will see his shadow today.

While it's true that my salad greens are purple, their coloring is not from cold temperatures! Winter, in NYC, has been, for the most part, fairly mild. In fact, it has been almost too warm and balmy for this time of year, and the things I grow are probably feeling somewhat over dressed in the winter gear I've put them in — a fact that you may reference by going to a precious post here on TLLG by clicking here.

Groundhog days in years gone by have proved quite exciting in New York City, particularly a couple of years ago, when a rodent known as Staten Island Chuck (who annually makes a prediction on whether the coming days will be an early spring or prolonged winter) came out of hibernation to see if he saw his shadow.

A true New Yorker, this little rodent even stood up to Mayor Bloomberg by biting Bloomberg's finger in response for allegedly being coaxed out of his warm home and deep sleep to perform his see-or-not-see-his-shadow task.


I say "allegedly" because there was speculation at the time that Staten Island Chuck was miffed at Bloomberg (for cutting the Staten Island Zoo's budget from 1.6 million dollars to 1.3 million dollars), and grabbed his chance to retaliate by biting the mayor's finger!

I posted a video of Chuck's attack on Mayor Bloomberg on my blog last year, and if you'd like to see it, please click here.

Meanwhile, dear reader, does the city where you live have a "mascot" rodent who serves as a meteorologist on this day? Has your area experienced a balmy winter? And if so, and you are a gardener, what impact has it had on the things which you grow?
Posted by The Last Leaf Gardener