Did Mayor Yury Luzhkov tell Bloomberg about spraying the clouds? 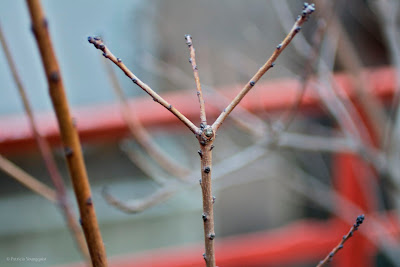 When I went out to check on things in my urban (NYC) terrace garden, I found one of my shrubs, the Continus Coggygria AKA Smoke Bush, also known as 'Grace' (pictured above), in the throes of deep prayer, as evidenced by the upright and open position of her sweet little branches in the image seen here.

'Grace' confided in me that she was inspired to "lift (her) arms to pray" because she had remembering hearing of Joyce Kilmer's poem, where the quote is from, in past postings here on this blog which you can find by clicking here as well as here and here.

My Continus Coggygria is not prone to prayer, but she confided in me that she felt if trees can lift their arms to pray, why couldn't shrubs? And she said that she felt the need to pray because of the lack of snowfall we have had in New York City this year, as she is very worried about global warming!

Snow, while it is a hindrance to many New Yorkers, and admittedly impedes the elderly and physically challenged from getting around, is something my Continus Coggygria truly misses.

She recalls the time last winter when she allowed her branches to be a cup for "nature's snow cones"  which was a year and a day ago on January 27, 2010, a fact, dear reader, that you may recall from the image seen below. 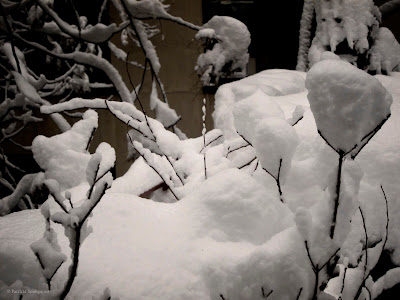 It seems my Continus Coggygria feeling's were prompted by reading that New York City, where she and I live, has lately been accused of being a "nanny city" with our Mayor Michael Bloomberg "taking to the radio to pontificate about our lousy diets, gripe about our sinister smoking habits, and promote his latest utopian health scheme" (read full article here), and the actions of "hissoner" have prompted several jokes by yours truly when it comes to considering the small amounts of snow we have had in New York City this winter season.


"Perhaps, Mayor Bloomberg has banned snowfall in New York City," I have suggested, and I have offered an opinion that "if and when snow does fall again here in New York City, perhaps it must now fall on alternate sides of the street so as to not interfere with parking and trash removal regulations. Or better yet only fall in the city's parks."

Little did I know when I made these jokes, that my Continus Coggygria would take them to heart, but it seems that she has actually thought that our Mayor could and did ban snow! It turns out that she is aware of information documented in 2009 regarding a mayor in Russia banning snowfall!

As it happens, my Continus Coggygria has her facts correct. Mayor Yury Luzhkov, who was the mayor of Moscow, did attempt to ban snowfall on his fair city. In a 2009 article TIME World stated, "For just a few million dollars, the mayor of Moscow will hire the Russian air force to spray a fine chemical mist over the clouds before they reach the capital, forcing them to dump their snow outside the city. Authorities say this will be a boon for Moscow, which is typically covered with a blanket of snow from November to March. Road crews won't need to constantly clear the streets, and the traffic — and quality of life — will undoubtedly improve." (To read the full article, please click here which is also the link to credit for the image below). 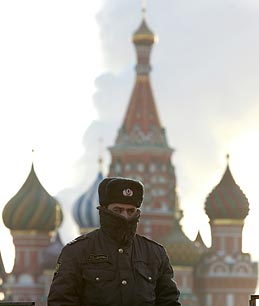 Any thoughts, dear reader on how I might console my Continus Coggygria at this time? It has been unusually warm in New York City and I respect her feelings, after all, she has been the inspiration for one of my most popular greeting cards  titled "Grace" (Smokey Bush) which can be viewed by clicking here.