The Gathering of Rosebuds 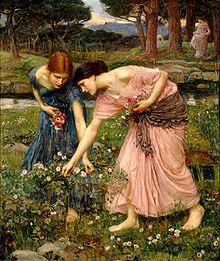 Most everyone is familiar with the aforementioned "quote" as it includes the words which are the opening stanza to Robert Herrick's famous poem, To the Virgins, to Make Much of Time, a poem, that was the inspiration for the painting, Gather Ye Rosebuds While Ye May, by John William Waterhouse. The painting is pictured above in an image from Wiki.

As Wiki concurs, Herrick's poems were known for their "overriding message", that "life is short, the world is beautiful, love is splendid, and we must use the short time we have to make the most of it".


My garden has certainly been a help in my putting the well-worn make-the-most-of-life-philosophy into practice. The two pictures of the roses, featured below, 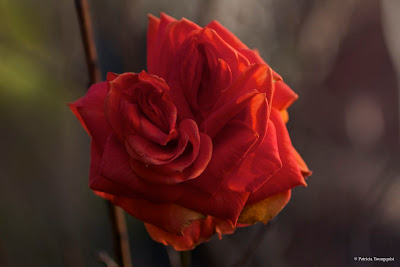 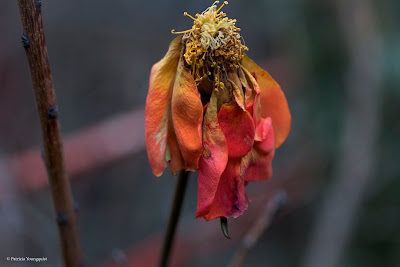 When I took the first image, I was painfully aware of the fact that I was beginning to be on borrowed time (in terms of the inevitability of winter temperatures settling  — it is December after all) with some of the things which were still thriving in my terrace garden, including my Helichrysum bracteatum AKA Strawflowers as well as my Tropaelum majus (Nasturtium) and my Echinacea — a fact which I have included in a few of my recent postings, including ones which you may refer to by clicking here and here.

However, this past Saturday, December 17th 2011, when a sudden extreme drop in temperatures zapped New York City, the beautiful flowers that still had been thriving on my Tropaelum majus collapsed nearly to the point of being beyond recognition. And one of my sweet roses tried to hang on to as many of her petals as she could (which is seen in the second image at the top of today's entry).

The severe mood swing of Mother Nature was anticipated — because of the time of year — but, perhaps, because the weather change was so sudden, seeing its direct impact on some of the things that grow in my garden left me a bit in shock and wondering if Juan V and I had made the right decision to postpone this year's garden winterizing until December 27th 2011 (we did it on December 11th last year). With this year's warmer December temperatures, our decision to wait seemed prudent (as I mentioned in a few posts last week which you may refer to by clicking here as well as here and here).

And, even though we had the sudden drop in temperatures this past Saturday, "a warmer trend" (temperatures in the fifty degree range) is predicted for much of this week, which hopefully means that Juan V and I did make the right decision. Still, I find myself concerned about the well being of the things I grow, and wondering about their "durability" until December 27th, when they will be put into a warm bed and will be fully protected for the long winter season.

My roses, it seems, were a case of life imitating art in terms of Herrick's words,

This morning (as is my morning ritual) whilst having a cup of strong black coffee, I made my "usual rounds" perusing blogs I have bookmarked, where I often check in, to leave a comment in support of the blogger's endeavors, and I received some sad news when I read one of Michelle Fabio's blogs, Goatberries.

In her post today, Michelle (who among many things raises goats) wrote about the sudden turn of events in the life of her precious goat, Pinters, which resulted in her death. Once again, I was reminded of the fragility of life, and the urgent need to preserve every given moment permeated my thoughts. I sent Michelle one of the roses from my garden (not featured here, as the one I gave her was intended for her and those near and dear to her who are suffering from the pain of loss at this time).

I am aware that, even though we all know death and loss are a part of life, it is difficult to feel consoled when we experience it ourselves, and it is also difficult to find the words to comfort someone in their time of sorrow, no matter what the nature of their loss is.

Later this afternoon, I also received news of someone experiencing a loss. In this instance, the loss was the death of my friend's (whom I will call VB) mother. VB is a friend I've known since 1987. The situation was this: I was working at my home when I received a phone call from my dear friend's brother. He was wondering if I knew where VB was as a dire situation with their mother had taken place.

Their mother, who lives out of the country near her other children (all of adult age), had taken a turn for the worse, and the children that were at the hospital with her wanted to unplug a respirator which was supporting her life, but they wanted the consensus of my friend VB, and the consent of his siblings who live in the states.

My heart went out to my beloved friend VB, and my thoughts also turned to the time in late November of 1995 when my sisters and I had come from the various cities where we live in the States, to be at my father's bedside in the intensive care unit of a hospital in the northeast, where it was anticipated that he would not survive, and on the off chance that if he did, the quality of his life would be minimal.

The May of 1995, six months prior to my father's hospitalization, was when Christopher Reeve had suffered a tragic accident which had permeated the media. Reeve's accident had left him paralyzed and in need of breathing tubes and oxygen.

It was the November of 1995 when my father fell ill, succumbing to severe emphysema, which resulted in him being hospitalized. While he was in the hospital, a failed surgical procedure caused him to go into septic shock. That is when a nurse at the hospital told us, "I am sure your father is not as wealthy as Christopher Reeve, and therefore, unlike Reeve, he will not be able to afford the oxygen that he will need if he pulls through this trauma." My father's wife wanted the respirator to be removed immediately, and he died soon after.

As for my friend VB, I knew that a decision to remove his mother from a respirator would be something that he could not live with. "We are not our own," VB constantly reminds me when subjects of life choices and issues come up in conversation. Thankfully, VB and his siblings did not have to make the decision. Their mother passed away on her own this evening. I am sad for both VB  and Michelle and feel their losses as if they were my own.

At this time, being there for both of them is all I can offer, but what I can offer to others, if they are so inclined, are my services as a Virtual Story Producer, which is what I did for Donna De Solis (a woman who's been mentioned on this blog) when she lost her friend, Warren, to AIDS.

A Virtual Story (or mini movie on a DVD) is a beautiful way to preserve the memory of a loved one, for I compile it from your photos, videos, and narratives, putting together your loved one's story in a sensitive and caring manner. If you care to view the one I produced for Donna, it is on my You Tube Channel and I have her permission to share it with you, so if you want to see it, please click here.
Posted by The Last Leaf Gardener