"Life is like eating artichokes, you have got to go through so much to get so little." 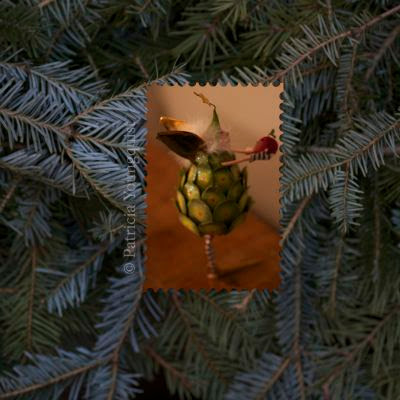 One of the little succulent garden figurines who came to spend time in my indoor succulent garden (a garden that I decorate for all of the seasons, which I have written about in a number of blog entries on TLLG which you may refer to by clicking here) is Lady Artichoke (seen in the image above).

She was featured in a post on nybg's (New York Botanical Gardens) tumblr about a week ago, and in that blog entry she is seen with her comrades in the following picture which accompanies that entry. 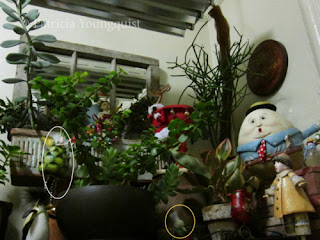 I return to Lady Artichoke today because of the Tad Dorgan (Thomas Aloysius Dorgan) quote, "Life is like eating artichokes, you have got to go through so much to get so little."

Like yours truly, who creates characters with the things that grow (as well as the objects that surround them) in both my indoor (succulent) and outdoor (urban terrace garden where I grow 80+ things) gardens, Dorgan (among other endeavors) created comic strips which had an indoor and outdoor theme. One of his creations was called Indoor Sports, that was considered "a main feature", which "at times was accompanied by Outdoor Sports."

Dorgan's career as a cartoonist began at the San Franciso Chronicle, but he was there for only three years, leaving to work in "New York City at the New York Journal as a sports writer and a cartoonist."

As you know, if you follow this blog, I obviously appreciate comic strips given the number of posts which I have written about Dagwood as well as Mutts (which you may refer to by clicking here and here respectively).

Additionally, in my very first blog entry, I mentioned, Herb Gardener, a cartoonist turned playwright, due to the fact that his cartoon character's conversation bubbles became bigger than the character.

But today's blog post was inspired by Lady Artichoke, who reminded me of Dorgan's quote, "Life is like eating artichokes, you have got to go through so much to get so little," because she was offended by it. As an artichoke, she did not feel it was "politically correct" to say one went through so much to get so little when referencing this vegetable, and, she also took offense to Miss Piggy's quote about artichokes in which Piggy stated, "After all the trouble you go to, you get about as much actual "food" out of eating an artichoke as you would from licking 30 or 40 postage stamps."

"Artichokes have feelings too", Lady Artichoke explained pointing out that they were known for their hearts. However, she was consoled by the fact that Dorgan is "credited with either popularizing such words as 'dumbbell' (a stupid person); 'for crying out loud' (an exclamation of astonishment); 'cat's meow' and 'cat's pajamas' (as superlatives) . . . and 'yes, we have no bananas,' which turned into a popular song."

Moreover, Lady Artichoke's heart was deeply moved when she learned that Dorgan, even though at age thirteen he "lost the last three fingers of his right hand in an accident with a factory machine", went on to be a cartoonist!

However, he eventually retired "because of poor health, and a heart ailment (that) kept him home for the last years of his life"  so he certainly knew about the feeling of going through so much and getting very little.