Wednesday's Wisdom: " . . . black has it all. White too. Their beauty is absolute. It is perfect harmony." 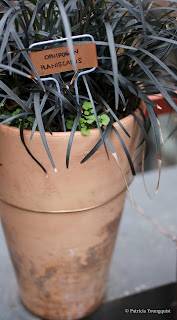 Today's LLG blog segment on Wednesday's Wisdom, is being authored by a guest blogger, who happens to be my prolific Ophipprolificogon planiscapus AKA Black Mondo Grass, featured in a photograph that I took of him yesterday in my urban (New York City) terrace garden, and this image can be found in the top lefthand corner of today's blog entry.

The Ophipprolificogon planiscapus shown here is one of the three of the Black Mondo Grass triplets, which I have had for many years in my garden, and he is the most vocal of the three. Therefore, he wanted to voice his opinion regarding something that I posted both on nybg's (New York Botanical Garden) tumblr page as well as TLLG's Facebook Page. (He will get into that later.)

For now, it is sufficient to say that my Black Mondo grass is no stranger to voicing his views on the Internet. 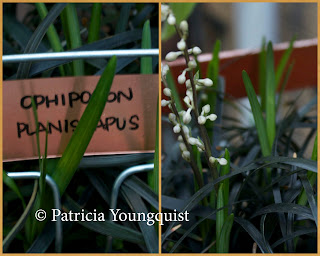 In any event, since today's LLG post has the distinction of being authored by my eager-to-weigh in Ophipprolificogon planiscapus, please allow me, without further ado, to hand my keyboard over to him.

Hello, I am the aforementioned Ophipprolificogon planiscapus who some folks call Black Mondo grass, and I am one of three triplets (pictured together below) 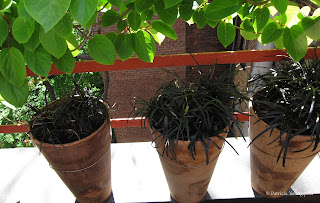 in a photograph taken earlier this year, where we live in our respective containers under the "canopy" of Patricia Youngquist's Actinida kolomikta and Actimida AKA Kiwi Vines, although we were in this garden before that vine moved in.

In any event, we live here with some eighty plus things such as other grasses, plants, flowers, vines, trees, shrubs and herbs. We total over eighty in number, and, once in a while, one of our "garden comrades" says something without giving the "whole story", and that brings me to why I am posting here today, which is not just for myself, but it is also for the other Ophipprolificogon planiscapuses. We triplets want to give an addendum to something the White Swan Echinacea, an herb which grows in this garden with us, said, and I have been appointed the spokes-plant.

As it happens, this past September, the White Swan, in response to folks who say one should not wear white after Labor Day, put up quite a fuss about this. While she is no slave to fashion, and wears white no matter what the time of year (she is still wearing it as of this blog entry), the White Swan, "fought back" on this fashion rule, reminding everyone and anyone, that Coco Chanel was known to have said, "Vous pouvez porter blanc toute l' année!"

The White Swan's "speaking out" is something that you might recall from a previous blog entry on TLLG which you may refer to by clicking here. And, Ms. White Swan was right, Ms. CoCo Channel did say, "Vous pouvez porter blanc toute l' année!" And while none of us Black Mondo Grasses speak French, we do know that Ms. Coco Chanel did not limit herself to the wearing of white! In fact, she had some nice things to say about our color too; after all, Ms. Chanel "invented" what folks call "the little black dress" (seen in the Wiki image posted below). 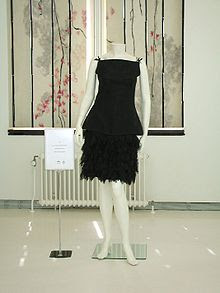 It is the understanding of all three of my Black Mondo Grasses that not only did Ms. Chanel invent "the little black dress," but she had this to say about the color
black: "I imposed black; it is still strong today, for black wipes out everything else around."

However, we Black Mondos do realize, dear reader, that you may be wondering why, since, the White Swan referenced the wearing of white quote during the first week of September, are we, the Black Mondo Grass trio just mentioning it now?

Our reason for this is that another wearer of white in the urban garden where we live, and who is known as an Sweet Autumn Clematis encouraged Ms. White Swan, to have Youngquist post the Chanel-blanc-toute- l'année quote on nybg's (New York Botanical Gardens) tumblr this past Tuesday! 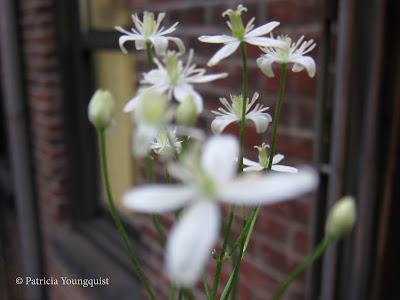 The Autumn Clematis's opinion carries a lot of weight in this urban garden, and, furthermore, it has been featured in a number of blog entries on TLLG, including ones which you may refer to by clicking here and here as well as here, so, naturally, when it said to post something on having white in a garden at this time of year, our gardener, and your "regular" blogger, Patricia Youngquist, listened, and she posted their information on nybg's tumblr which you can read by clicking here.

The White Swan and the Autumn Clematis have been in cahoots for quite some time in regards to raising awareness about the garden color white — even in autumn — because nybg has been doing a "morning-autumn-color-eye-candy-feature" on the "traditional colors" of autumn: pink, yellow, red, green, orange; and even blue, which we love too; but they have said nothing — as of this blog post — about white or black colors in the garden!

It was terrific that Ms. White Swan and the Autumn Clematis sought to raise awareness about the color of white, and use Ms. Chanel's quote regarding white to support their cause, but they should have mentioned the color black too! After all, not only did Ms. Chanel claim, "it (black) is still strong today", which would've tied in with the White Swan's and Autumn Clematis's reference: they live in the garden with us and the least they could've done was include us in their plight!

After all, there are times when the three of us Ophipprolificogon planiscapuses sometimes feel slighted, because we are not easily seen, being beneath the "canopy" of Youngquist's Actinida kolomikta and Actimida (Kiwi Vines), as you might surmise from the photographs  below.

The first of these images is an aerial photograph taken by Juan V, and the arrow Youngquist has added shows the west view (that now has a bare trellis) where an Ipomoea Cardinal Climber had been thriving until just recently when this non-hearty perennial, gave in to fall's weather conditions.

The east view of Juan V's recent photograph shows where the leaves of the Actinida kolomikta and Actimida have turned from a brilliant green to a golden hue in honor of autumn, but we the Black Mondos are hidden under their canopy or their "protective wing" as the Kiwis prefer to call it.

For indeed, in the summer, they give us shade, with their brilliant, lush green leaves; and in the autumn, when the months are cooler, their golden yellow leaves (which are beginning to fall off) give us warmth and protect us from the wind. 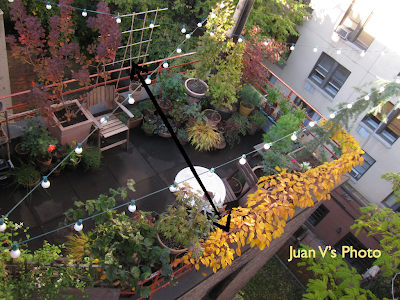 The second of these images (below) was taken from the vantage point of Youngquist's kitchen window (which is where the bottom point of the white arrow is pointing, while the top point of the arrow is pointing to us). It was not  taken for aesthetics, but, it was taken at our request to Youngquist. We wanted her to shoot an image which would give you an idea of how we Mondos look under the Actinida kolomikta and Actimida's leaves. 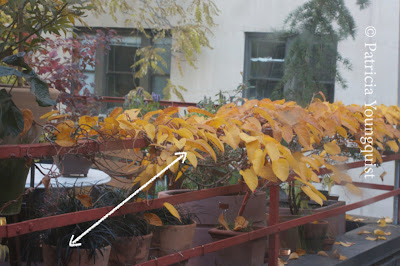 In any event, the Actinida kolomikta and Actimida are pretty wise, and it is no wonder that Youngquist featured the Actinida kolomikta (its partner,  Actimida, was also featured in the garden-themed movie, but was too shy to speak on camera) as the narrator for her first garden themed movie, "The Kiwi Speaks! Fifteen Minutes of fame . . . almost."

The aforementioned movie is in Patricia Youngquist's library of Virtual Stories, which include product promotion movies and slide-shows, wedding-related movies and Memorial movie which she has created and produced for clients. If you'd like to see any of these, please click here for a link to her Vimeo channel.

The Kiwi Vines tells us Black Mondos that a sequel to their movie is in the works; but would not give me details as they are sworn to secrecy, they did however, provide a nice consolation to the Coco Chanel quote dilemma that I've raised here. And they did this by telling us Mondos yet another Coco Chanel quote which is this: "I have said that black has it all. White too. Their beauty is absolute. It is perfect harmony."