Today's the last Saturday of October 2011! Question: Will it be Halloween's Last Stand? 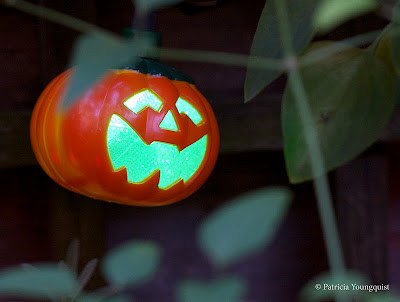 If you have been following my blog, then you are probably aware that some of the things which I grow in my urban (New York City) terrace garden have taken it upon themselves to express their thoughts and opinions by authoring blog entries and posting them within this blog.

This "hoopla" — which has caused one of the Halloween pumpkins that I currently have in my garden to be overcome with laughter as seen in the image to in the upper lefthand corner —  all started in April of 2010, when my blog was only a little over four months old, and one of the flowers from my Paeonia suffruiticosa (Tree Peony), posted a photograph of herself with a short narrative. (If you would like to refer to this, please click here.) 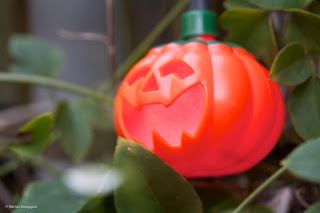 As time passed, word got out among the plants, vines, flowers, herbs, trees and shrubs — which totaled a little over eighty when I last took a census — that the flower from my Paeonia suffruiticosa had done this, and many of the things which I grow began authoring entries on my blog. (This fact has  caused another one of the Halloween pumpkins that I currently have in my garden to also be overcome with laughter as seen in the image at the right.)

However, in the "interim" of my tulip's "prose", not wanting to be outdone, my Physocarpus opulifolius (Coppertina), went to great lengths to weigh in with his position on life in my urban terrace garden, and if you'd like to read what he had to say — I'm sure he would appreciate his voice being heard — you may do so by clicking here.

Meanwhile, my Helichrysum bracteatum (Strawflowers), has also "penned" (or shall I say "key-boarded"?) her thoughts too in a blog post which may be found by clicking here, while my Penniestum setaceum (Purple Fountain Grass), on behalf of herself and my Acer palmatum, posted a letter requesting assistance, so that an image of them taken by yours truly could be rendered in a manner that it, too, could be used for one of the greeting cards, invitations or event program covers that I design, produce, and sell within the Card Shoppe Pages (which you can view by clicking here) of my web-site, Patricia Youngquist Photo-Art.

Knowing that my Physocarpus opulifolius was allowed to be so prolific in its blog post, and knowing that my Helichrysum bracteatum shared her deepest concerns in "blog-format", and knowing that my Penniestum setaceum took to the task of letter writing, has caused some of the other Halloween pumpkins that I currently have in my garden to now join in with the laughter — seen in the image posted below. 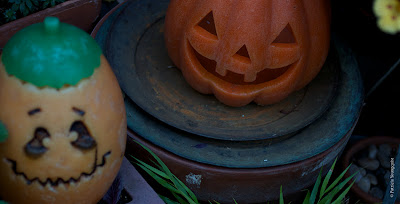 Meanwhile, part of all of the "pumpkin laughter" that is currently taking place in my terrace garden as Halloween approaches (it arrives in three days counting today) is because not only do they know that many more of the things which I grow in my garden have authored posts on my blog, but the pumpkins are aware that the things which I grow have also let their opinions be heard in different ways in addition to directly posting to this blog.

For example, my yellow rose not only authored a post (this past May, which you may refer to by clicking here) for the blog which you are reading now, but she convinced me to state one of her positions regarding the term "eye-candy" on nybg's (New York Botanical Garden) tumblr! This can found by clicking here, where you will see pictures of yellow roses (taken by yours truly). These images are accompanied with my rose's thoughts — exactly as they were told to me. 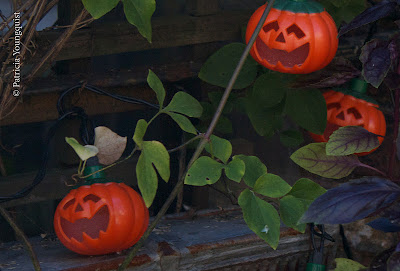 Some of my other pumpkins seem to be in joyful agreement that it was their
heartfelt reaction to my rose's thoughts on the term "eye-candy" that brought them some "well-deserved" press that they received in this past Thursday's blog entry, which you may refer to by clicking here.

But, having proclaimed throughout today's blog entry that my pumpkins are sharing in the joy of seeing what I grow in my garden be given the opportunity to express themselves, I should have suspected that they had an alternate motive! (In spite of how "innocent" they look in the image posted below.) 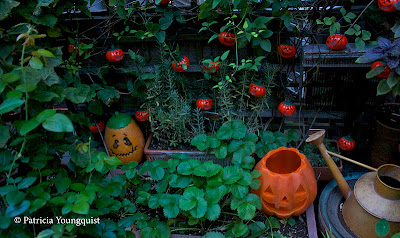 Yes, even pumpkins have their price! I have come to realize the main reason for my pumpkins' laughter today is from their over hearing the latest "news" regarding Halloween. They have brought it to my attention that Timothy Larson, an elected representative from Connecticut, wants to move Halloween to the last Saturday in October instead of keeping it on October 31st, as it has been since the beginning of Halloween tradition.

"How," my pumpkins are asking, "can a holiday such as Halloween which is equated with All Hallo'ws Eve  (the night before All Saints Day which is celebrated on November the First) be moved?"  My pumpkins did not stop with their question, but they continued with their thoughts and reminded me of how "silly" this idea is, given that, "the very word Halloween is first attested in the Sixteenth Century and it represents a Scottish variant of the fuller All-Hallows-Even ('evening') that is, the night before Hallows Day."

As you may have surmised, dear reader, from my pumpkins' accurate interetation of the misused term "eye-candy" by certain gardeners, (discussed in yesterday's blog post which you may refer to by clicking here), they are quite well read and make informed remarks; they tell me their source for the aforementioned fact about the "Scottish variant" as well as other interesting facts surrounding "the reasons on why Halloween is celebrated on OCTOBER THE THIRTY-FIRST, " can be found by clicking here.

My pumpkins point out — and rightly so —  why are law makers spending money on things like moving a holiday which is  rooted in history, instead of creating jobs and heath care for their constituents? Will this lead to only celebrating the Fourth of July on the closest Monday for the public's long week-end convenience? (This happened with Memorial Day, a fact that I mentioned (yes the things which I grow in my garden do let me do the blog posting from time to time) in a couple of blog entries this past May which you may refer to by clicking here and here).

Moreover, will the beginning of a calendar year change to the first Monday closest to January 1st to create a long week-end for the law-makers who spend their time creating such changes instead of programs that their constituents need?

How long will it before lawmakers try to forbid it to snow or rain on days that precipitation would cramp their style?

SUMMER 2020 ADDENDUM:
"Never say never," the saying goes, and I suppose that applies to saying, "I no longer....," which I did in my 2018 addendum and now I'm here to announce at the advice of Chris Deatherage, my book series formatter, who is also my web-master (for patriciayoungquist.com) I will soon have some versions of the Halloween cards that are referenced in this blog post available via FAA.
Posted by The Last Leaf Gardener