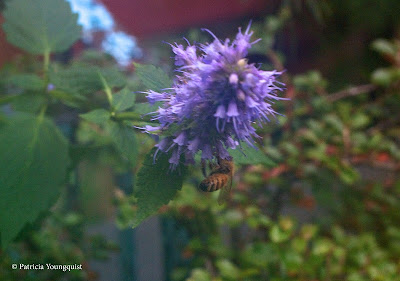 Here's wishing a happy and blessed Rosh Hashanah to those who celebrate the holiday. I was not raised in the faith associated with this day, so I confess that I do not even know if this is a proper salutation for whose who do honor it.

While I have friends and colleagues who celebrate it, and who have shared a lot of information about Rosh Hashanah with me, most of my knowledge regarding its meaning, its religious significance, traditions and foods associated with it have come from, odd as it may seem, my parish priest, and, of course, the Internet.

This is somewhat sad since I have "prominent" Jewish ancestors, from which I was taught nothing about observances or customs, because I did not even know of any of my Jewish roots until I was in my mid to late thirties. As a matter of fact, this aspect of my family history was only brought to my attention because of my keen interest in reading and writing.

It was my paternal aunt (who was my father's sister) Evelyn, that knew how much I wanted to work as a writer for a living, who finally told me about a couple of my ancestors' endeavors as writers. I use the word "finally" because, even though I had had correspondence with Evelyn since I was a young child, it was not until I was in my mid-thirties that she told me about one of the writers in "the family", her uncle and my great uncle David Loth, an author of books and a well respected news reporter, and someone that I referred to in a post at the onset of this blog which you may refer to by clicking here.

David was in his eighties when I met him, and, unfortunately, I was put in a compromising position by his nephew as well as David himself so, needless to say, I did not explore my family history with him. I never spoke to Evelyn about what happened with both David or Nicholas his nephew, but, some years later, she told me about her great grandmother, Rosa Fassel Sonnenschein (who would have been David's grandmother, making Rosa Fassel Sonnenschein my great great grandmother).

Rosa's role in history is that she is famous for starting the first Jewish newspaper for women and was known as the "flamboyant editor and publisher of The American Jewess, the first (1895) independent American Jewish magazine, published by a woman" and dedicated to issues concerning women. This is a fact that I mentioned in a previous post at the onset of this blog in an entry which you may refer to by clicking here. The aforementioned post does not concern itself with how my ancestors celebrated any of the Jewish holidays such as Rosh Hashanah, or any family rituals because I have no idea how they observed them, or if they observed them, which I assume they did since Rosa's father was a rabbi, and she ultimately married (and later divorced) one.

In any event, I know nothing about these roots other than what I have stated here; however, I do have some letters, journals and photographs that I was given when Evelyn died in 2009, and I had hoped to go through them at some point. Going through letters and photographs of course is not the same as having been told stories while being in the company of your parents or grandparents; however, anybody who could tell me about my ancestors has died, with the exception of my father's brother, who most certainly would have some memory of them, but I have only met him on two occasions, once when I was ten, and once when I was in my thirties, and on both occasions he probably said five or six words — at the most — to me.

In my family, children were seen and not heard and nor allowed to question anything so I am not so sure if I had any inkling that I would have been permitted to ask anything when I grew up. Why this history was kept from my family is something I always thought that I'd have to live with, but, thanks to an incident which occurred a little over a year ago, I may not have to go the deciphering family history route alone.

Here's is what happened, a little over a year ago, in the spring of 2010, when I was searching around for information about Rosa Fassel Sonnenschein: I came across a comment that someone had made on a web-site, Jewish Women's Archive, which read:

"I am proud to be a
Submitted by Anonymous (not verified) on September 20, 2009 - 1:59am.
I am proud to be a great-granddaughter of that great American Jewess, Rosa Fassel Sonneschein. Though I knew almost nothing about her from my father, he (who was remarkably taciturn about his early life) did mention a few things about her. The bulk of what I know are from sources to which we all are privy. She was truly intellectual, beautiful, wily and feisty. What I knew from the man who was her grandson was that she smoked cigars, drank tea from a saucer, and told him that "It is just as easy to fall in love with a million dollars, as it is to fall in love with nothing." She was an early proponent of a woman's right to choose, as we say today. Though not a fit mother in many ways, which I shall keep private, I presume she was well loved by my father, for she was one of the few relatives he mentioned. He traveled with his first fiancee to introduce them toward the end of Rosa's life and she kept them waiting for over an hour, but was perfectly put together when brought out to visit (red nails and all)! She was such an admirable woman and her attributes lend themselves justifiably to idealization. But she was complex, complicated, and conflicted -- which is to say that she was human -- with a richness and texture so compelling. Yes, her great-granddaughter is very happy to be a Jewess.  And SO thankful to be learning more about her and in her own words, through the efforts of the Jewish Women's Archive."
The moment I read "Anonymous's" words, "Though I knew almost nothing about her from my father, he (who was remarkably taciturn about his early life)", I knew I had found someone in my family history, for being "remarkably taciturn"  was more of a family trait than any reverence to tradition associated with holidays such as Rosh Hashanah.
I am happy to say that I was able to find the author of this post, not through the Jewish Women's Archives, but by looking through loads of materials on web-sites associated with helping one find information about their family tree. Not only did I find "Anonymous",  but she introduced me to another member of the extended family, and, though none of us live in the same state, I have met them both on separate occasions when they traveled to New York City and we already have a close bond. It is the hope of all of us that we will find out information about our ancestors and why they felt the need to keep everything secret,  although we  suspect survival in times of prejudice was a motivator and whether they observed holidays or not may remain a mystery.
Meanwhile, I was informed that apples, with honey, are consumed during the celebration of  Rosh Hashanah, symbolizing a sweet year. Hence, I took the opportunity to learn some more things about the role of bees (since they are the ones that make honey, and since they have recently been "visiting" me in my terrace garden indicated in the images of them enjoying my Hyssop.

Additionally bees were included in another entry that I made this past summer where they can be seen enjoying my Echinacea, and this entry may be found by clicking here. 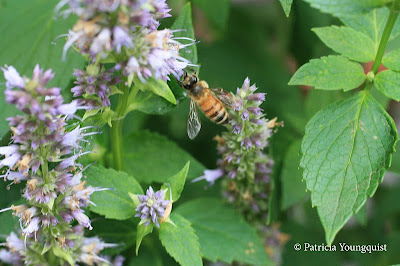 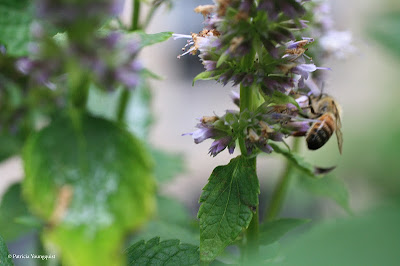 As for the  bees' role in Rosh Hashanah, what I have discovered from Hands on Jewish Holidays, is this: "Even though honeybees are non-kosher insects, the honey they produce was judged to be kosher. The Mishna in Tractate Bechorot states: 'That which comes from something which is Tameh [non-Kosher or ritually impure] is Tameh, and that which comes of that which is Tahor [Kosher or ritually pure] is Tahor.' Thus, the general rule is that the product of a non-Kosher animal is not kosher. However honey is kosher because bees merely process the nectar; it is not an excretion that originates from them. According to “Ask the Rabbi”, the Mishna in tractate Bechoot states: 'Why did they say that bee-honey is permitted? Because even though they bring it into their bodies, it is not a ‘product’ of their bodies [it is stored there but not produced there].'  If you'd like to read more about this, please click here.

However, in the interim, dear reader, I wish you a sweet year, as well as the opportunity to learn "first hand" the stories of your ancestors, if this is indeed the desire of your heart.