Happy Half Year to You! (PART ONE January and February 2011 Follow-Ups)

Happy Half Year Eve, to you, dear reader, Happy Half Year Eve to you! By the end of today, June 30th 2011, the year of 2011 will be at its half point, causing me to remember a quote that I heard sometime ago from Rabbi Joseph Potasnik, as I was "radio surfing."

The quote is this, "It is said the pessimist sees the glass as half-empty the optomist sees it as half-full, and the realist sees a need for a new glass."

Having been made aware of this quote, I ask you, dear reader, how do you see the date of June 30th 2011?

Since this year of 2011 is half over, do you feel you are on your way to a goal in any New Year's resolutions you may have made at the onset of the year?

Or do you feel that you blew it (in terms of your resolutions) early on, and have therefore abandoned a certain hope in terms fulfilling any promises that you made for yourself? In other words, is this half-way marker of the 2011 year a chance for you to begin again, or is it another reason to berate yourself for resolutions not kept, which is why yours truly does not make any such promises (as discussed in previous post which you may refer to by clicking here) to herself in the first place.

Since we are reaching the mid-point for the half year, I'd like to take the opportunity to follow up on certain blog posts that I have made for the year thus far. I am doing this because often I read blogs where the blogger will throw out ideas or concerns and then never mention them again.

However, this is not the case with Ms. Fabio, whose blogs I cited in a post made a few weeks ago which you can read by clicking here.

Ms. Fabio's blogs, unlike other blogs that I've read, makes it a point to follow up on incidents that she brings to her reader's attention, and since I appreciate that about her, and I imagine her followers do as well, I would like to offer follow-ups on some of the things that I've mentioned, and what better time to do so then at the year's mid point? I have divided these follow-ups into three separate segments.

Do you recall, dear reader, that back on January 27th of this year, when my terrace garden was buried in snow, that I wrote about the fact that the snow-filled branches of my Continus Coggygria (Smokey Bush) resembled snow cones? The image in the top left-hand corner of the collage posted below may strike your memory, and, if you'd like to refer to that post please click here. 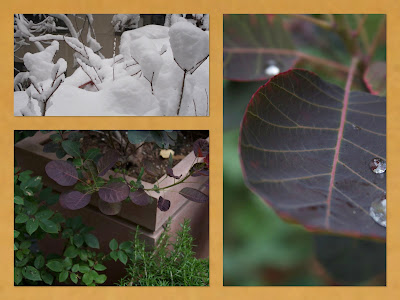 In any event, the "look" of snow-cones, on my Continus Coggygria (Smokey Bush), has  obviously changed with the season, especially now that the "official" season for indulging in snow-cones has arrived in New York City. Meanwhile, while folks are enjoying their summer by sipping on snow cones, the beautiful burgundy leaves of my Continus Coggygria (Smokey Bush), are loving the summer too, as evidenced by the photographs in the right portion —  as well as the lower right-hand corner of the photo-collage posted above. One nice thing about seasons is the realization that life is always changing; and if you are going through a rough moment it will eventually change just as the seasons do.
Another snow-ladened urban garden, which I wrote about this past January, is the polka-dot garden belonging to Victoria and Richard MacKenzie Childs, which you may refer to by clicking here. As you may recall, their garden, which is on a dock, alongside their boat, was buried in snow at the time of my initial posting, as seen in the image posted below. 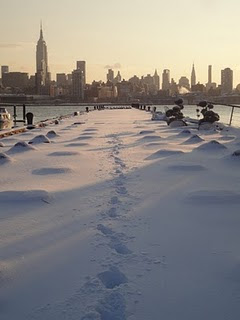 And now, not even seven months later, their garden is up and running, and they will be hosting an event on their boat (which I just received an email about), an event  for whose information can be found by clicking here. This is evidently an event for which there is a fee, and I will not be attending. Be that as it may, this blog posting is not an endorsement of their event, because I do not know enough about it to do so; rather, it is to serve as a follow-up to my initial post on the polka-dot garden. In the event, dear reader, that you read my January 25th 2011 post, and have wondered what became of the Mackenzie-Childs clan, and moreover, what they were doing about their garden, I have now given you some information to check out.

In February, I introduced you, dear reader, to Cecelia Abs André (in a post that you may refer to by clicking here), who lives in my neighborhood, and who, as you may recall, is an artist and gardener and her artwork was being represented by the image below. 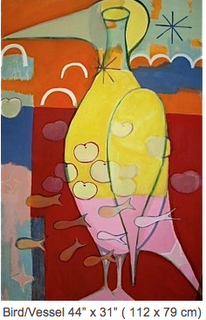 Since my posting, Ms. Cecelia Abs André has been involved in a couple of venues. Recently, Cecilia exhibited at Café LUCID, located on the east side in Manhattan, as well as a venue at Governors Island. The images posted below are from those venues respectively. 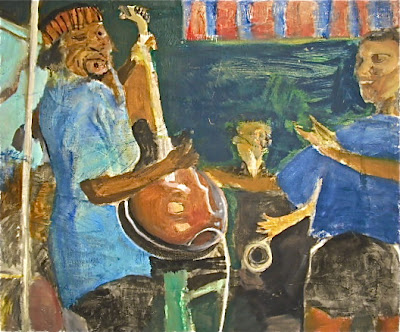 Also in February 2011, I gave a shout out to a store, a branch of Lucky Brand, formerly located in my neighborhood, and had lost its lease (you may refer to this post my clicking here). In that post, as you may recall, I made references to the out of the way kindness offered by the folks that worked at that store towards a neighborhood "celebrity" that had contracted Parkinson's Disease. In that post, I also gave a shout out to some of the out of the way efforts that various small businesses in my "hood" were making (businesses that I had written about this past fall which you may refer to by clicking here). With today's post dedicated to following up on certain topics mentioned in prior blog entries made this year, I'd like to draw your attention to a small business that is helping to promote an artist.

The small business is Sensuous Bean, a tiny store in my neighborhood (in close proximity to where Lucky Brand used to be). Sensuous Bean, sells an array of coffees and teas, from all over the world. The owner has purchased my greeting cards in the past, and she is quite supportive of artists and entrepreneurs. Small as her counters are, she always has room for various individuals' business cards, and currently she has found room on her shop's walls to showcase, and to sell, the art work of Tom, a dear man who works in the shop. The following images show Tom's work amongst the coffees and teas giving me new meaning to the 1970's paperback book, titled Coffee, Tea, or Me? 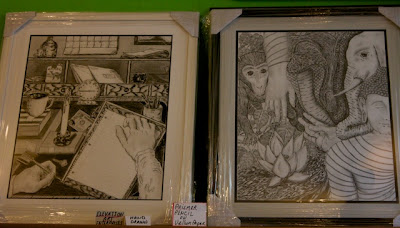 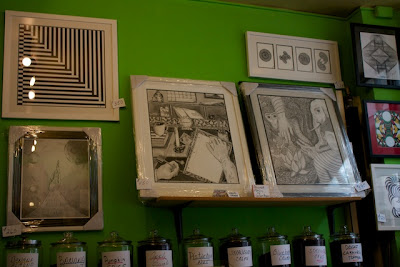 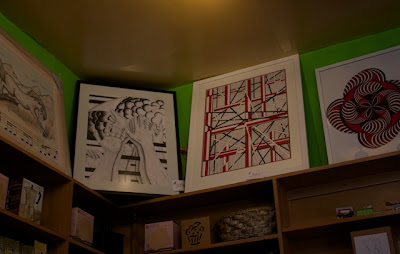 And I'm calling my new meaning Coffee, Tea or Artwork? (I highly recommend all three from this shop.)