Remember, Sidney Lumet, darling: "Great work lives on with us forever, much more important than an Oscar. Ya-dig?" 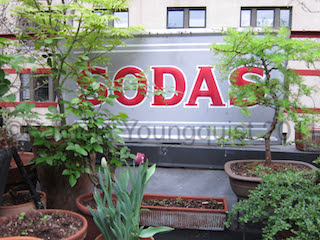 In yesterday's post I expressed my appreciation for the sentiment expressed in the comic strip, Mutts, (hinting that if one was quiet, they could hear the flowers singing in the rain), and early this morning I was greeted in my garden by a few more new visitors, including the tulips that you see in the photograph posted at the top of this blog entry.

They are at the northeast area of my terrace garden and almost a direct diagonal from the tulips that I wrote about in a previous post which included Sylvia Plath's poem about tulips, and it may be read (or reread) by clicking here.

I had come outside in the wee hours of the morning to water my urban garden and to write my Saturday morning blog entry. I had planned to write about Sidney Lumet, because he died four weeks ago today (after a battle with lymphoma), and I have been meaning to acknowledge his memory — or more honestly, my memory of him). However, when I saw these new tulip arrivals, I became very quiet within my heart, and I realized that not only could I hear my flowers singing in the rain, but they were also willing to act as a muse, so let me, without further ado, proceed with my recollections of  Sidney Lumet, the acclaimed film director whose last film, ironically, was Before the Devil Knows You're Dead, a film that took its title from an Irish saying,"May you be in heaven a full half-hour before the devil knows you're dead."

I met Sidney Lumet in 1989 on the set of Family Business.
This was a film starring Sean Connery, Matthew Broderick, and Dustin Hoffman (whom I'd auditioned with in the past, as indicated in a previous post which you may read by clicking here). Bill McCutcheon also played a role in  Family Business, and yours truly's big moment on the silver screen was with hiI had been cast for a silent-bit — in the "role" of a nun — to play in a scene at a wake and to guard the coffin where Dohney (played by Bill McCutcheon) had been laid to rest. The thrill of having a S.A.G. (Screen Actor's Guild) card had already worn off (a feeling I touched upon in a prior post), but I was grateful for the assignment. At least the fun of creating cards, based on a given role, to send to casting directors and talent agents, so that they would consider me for subsequent jobs (an exercise in futility, in a way, since I did not enjoy the work) was still strong. Perhaps this endeavor in card making was a forerunner for the greeting cards that I create now, with my philosophy to design communication materials for folks who want to send invitations that preserve a moment in time, have event program covers that enhance an occasion, and send greeting cards that are about more than communication, as evidenced in the selections I've created which are available in the store-front pages of my web-site.

Therefore, my work on Family Business was certainly no exception when it came to creating cards, and what is posted below is the card I came up with on the set of that film. 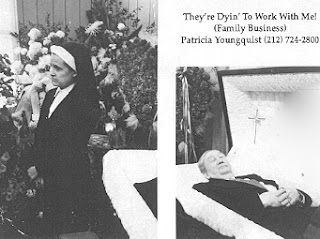 As you can see, yours truly, habit and all, is standing at the far left of the casket, and Bill McCutcheon can be seen in the casket — winking. Hearing my plan for the text on top to read, "They're Dyin' To Work With Me", brought a lot of smiles to the film set, especially when Mr. McCutheon and I posed for the card I envisioned. Sidney Lumet, upon seeing Mr. McCutcheon and I pose for my card, remarked to Dustin Hoffman,"Dusty, darling, they are having fun over there! "

Everyone on the set was "darling" to Mr. Lumet, even an extra, who was peeved that Lumet needed the entire cast and crew (including all extras) to return to the set the other day. This extra was peeved because she had scheduled an appointment with a psychic, and complained bitterly that she'd have to pay a hefty cancellation fee.

I took one of those theatre "pregnant pauses" and replied to her,"Must not be a great psychic or he'd of known you were going to be called into work and would not have scheduled the appointment."

Mr. Lumet roared with laughter when he heard this and quipped, "Did you hear that Dusty darling? The nun said get a new psychic!"

My recollection of Sidney Lumet isn't the most prolific but I am thankful to have had the opportunity to meet and work with him, even though it was at a time that, when it came to show business, "I'd had enough and couldn't take it anymore!"*

* FYI, this line as you may know, is from the film Network, a film which was directed by Sidney Lumet, and one of several films for which he was nominated for Oscar's best director: a reward he never received. Perhaps that is because he was critical of Hollywood, saying, "New York is filled with reality. Hollywood is fantasyland." Lumet did win a "consolation" prize from The Director's Guild, and he had this to say about never receiving an Oscar, "I wanted one, damn it, and felt I deserved one!"

It is written that Spike Lee's reply regarding Lumet's sentiment about not winning an Oscar was, "Great work lives on with us forever, much more important than an Oscar. Ya-dig?"

And I cannot think of a better way to leave this post dedicated to Mr. Sidney Lumet, but I welcome your thoughts on him and his work.