My Physocarpus opulifolius (Coppertina) and the Prodigal Son's Brother 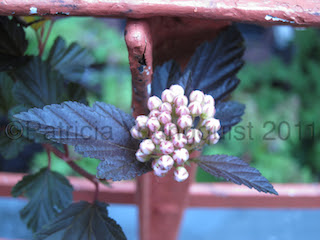 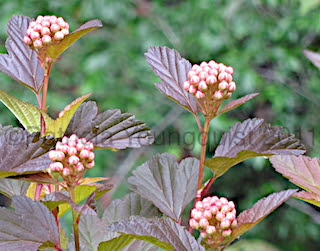 It has come to my attention that my lovely, Physocarpus opulifolius (Coppertina Tree), which is just beginning to produce its exquisite buds (some of which can be seen in the two photographs at the top of this blog entry), took it upon himself to write a blog entry and post it on my blog two weeks ago.

Evidently he thought he was not as appreciated in the same way that my Tulipa (Tulips) and Paeonia suffruiticosa (Tree Peony) are.

Apparently my Physocarpus opulifolius’s feelings of being under appreciated were due to the fact that I have written a number of blog posts about the Tulipa and Paeonia suffruiticosa, which grow in my rooftop garden, and I have also allowed both of them to write their own blog entries.

It seems my Physocarpus opulifolius was feeling neglected for not having been chosen to be a part of these collections.

In any event, you may recall that when my Physocarpus opulifolius expressed his thoughts in his blog entry he looked like this: 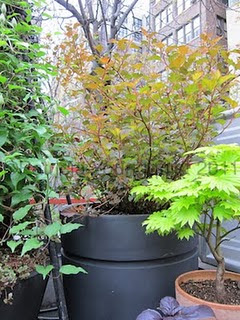 standing proudly in its then brand new Viducchi digs, and that in his entry, he also mentioned that the H.F. Young Clematis was just about to give birth (as evidenced by the tremendous amount of buds on the Clematis’s foliage which was — and still is — climbing up the pole to the left of my Physocarpus opulifolius, and he was correct in his observations regarding the birthing.

My H.F. Young Clematis did give birth a week and a day after my Physocarpus opulifolius posted his observation, and these arrivals can be seen in the photograph (posted below) taken the day they came to life. 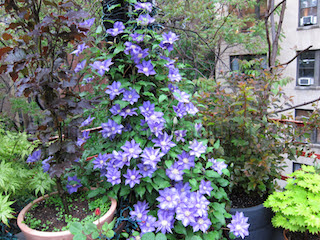 Their birth announcement was made by yours truly, in a posting, which you can read by clicking here. However, you may recall that when my Physocarpus opulifolius made the initial observation, he implied that he was put off for seemingly being under valued. He had this to say:

“What about featuring me? After all, with my coppery–orange foliage, I provide a beautiful contrast (if I do say so myself) to the H.F. Young Clematis whose leaves you can see to my left in the photograph posted above this blog entry, and if you look closely, you might even see the many, many buds that are about to burst into gorgeous purple flowers, which of course, The Last Leaf Gardener blogged about last year without mentioning my name.”

Obviously, my Physocarpus opulifolius was correct in his observation regarding the H. F. Clematis buds; however, he is wrong in his perceptions that I do not care about him as much as I care for my other herbs, plants,vines, shrubs, and trees, and therefore, his quote about “not being featured” brings me to one of the purposes of today’s blog entry, which is to let my Physocarpus opulifolius know that he is loved just as much as my other herbs, plants, vines, shrubs and trees; and also to let him know that his thinking that I care more about one than another is understandable, but it’s just not true; so, without further ado, here are my “comments” to my Physocarpus opulifolius in response to his blog entry.


Let me reassure you, mu sweet Physocarpus opulifolius, I would never have gotten Viduchi digs for you if I didn’t love you, nor, when I first discovered you, would I have rescued you from where you were being raised in a nursery in Brooklyn, and from there, carried you to a city bus that led to the “C” train (the subway I usually take from Brooklyn to Manhattan), then up the five flights of stairs in my building to my apartment which leads to my urban terrace garden, if I did not care about you. As for your thoughts about my numerous blog postings regarding my Tulipias and my Paeonia suffruiticosa, I’ll tell you this: The reason that I have “featured them” this past month and a half is because they are only here for a short while, before they hide in the garden for the remaining of the season until next year (as you can surely see for yourself from where you stand in the terrace garden).


Meanwhile, Mr. Physocarpus opulifolius, I still understand your feelings about not getting equal time on my blog or in the collection of invitations, event program covers, and greeting cards that I design, and I assure you that I say this from firsthand experience. I am one of ten grandchildren, and, growing up, I often heard my mother ask her father — my grandfather, Albert Elmer Herman Louis Melahn (who would be celebrating his birthday right now, May 19th, if he were alive today) — which grandchild he liked the best, to which he’d reply with a grin, and say, “none of them.”

He was teasing, but I could have felt slighted too, since I was the first of those grandchildren. Moreover, I was born on his wedding anniversary, but that fact still did not give me a position of honor. Nor should it have, I suppose, but as a child, a position of honor is something I wanted.

Now, however, it’s nice to know my grandfather loved all his grandchildren in their own way, as you, my sweet Physocarpus opulifolius, you and all my other herbs, vines, plants, trees, and shrubs, are loved by me, (and perhaps my grandfather taught me to love all things equally). Therefore, Mr. Physocarpus opulifolius, all I can say to you “l;is hang tight, I have other ideas for how to feature you” — and I’ll tell you about those before I finish today’s blog posting.


For now, Mr. Physocarpus opulifolius, I’d like you to understand the main reason that I needed to give so much blog time to my Tulipia as well as my Paeonia suffruiticosa this past month is, to reiterate, the fact that both of them are only here for a short while, before they hide in the garden for the remaining of season until next year, is cause for my actions — perhaps like those of parents appreciating moments of their children, because they realize that kids grow up quickly. (I was reminded of this when my sister spoke about her toddler wandering into the bathroom — where she was trying to relieve herself in privacy. Her first instinct, she confided, was to yell at her little boy for invading her private moment, but then she quickly came to her senses, realizing that “before [she] knew it, he would be fully grown, and asking for the car keys.”


So in the spirit of my sister, before my Tulipia and Paeonia suffruiticosa ask for the car keys (by going into hiding and sleeping for the remainder of spring, summer, and fall), I’ve chosen to give them much of my attention — but never intended it to be at the expense of ignoring you, dear Physocarpus opulifolius, or my other herbs, vines, plants, shrub, and trees for that matter.


You remind me, dear Physocarpus opulifolius, of the elder brother of the Prodigal Son, who as you may recall felt disgruntled when his father embraced the Prodigal Son’s return.

But, just as the father said to the elder son when consoling him, “Thou art ever with me, and all that I have is thine. It is good that we should make merry and be glad: for this thy brother was dead, and is alive again ; and was lost and now is found.” I say to you, dear Physocarpus opulifolius, you are always with me throughout the seasons, but together we rejoice when our friends the Tulipias and Ms. Paeonia suffruiticosa come to stay with us in my terrace garden, even it is only for part of the dreary month of April and part of the “merry, merry month” of May.


Ah, but I still imagine, Mr. Physocarpus opulifolius, that you are wondering when I am going to get to what I said I’d do midway through this post (when I stated “all I can say to you, is hang tight, I have other ideas for how to feature you, and I’ll tell you about those before I finish today’s blog posting”), so without further ado, let me share my plans for featuring you.


I would like to announce to you, dear Physocarpus opulifolius, that you will be featured in my next garden film, so get some rest, because shooting movies spans many hours, and with this narrative, dearest Physocarpus opulifolius, I hope these words have reassured you of how much you are valued, and please, please, keep producing your beautiful buds and flowers. They are appreciated by all. 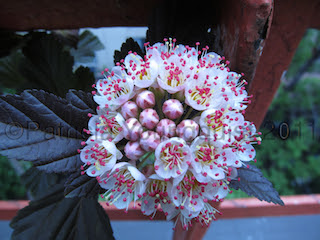 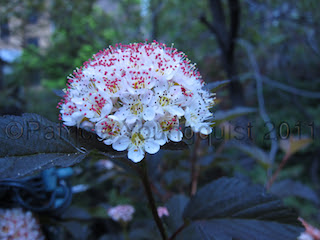