"The best thing one can do when it's raining is let it rain." 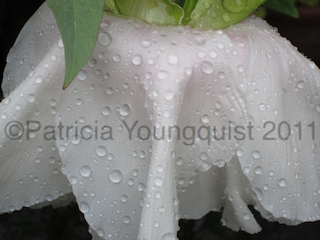 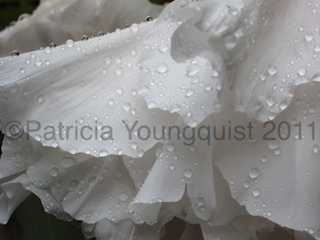 The photographs posted above are of one the many flowers that only recently bloomed on my Paeonia suffruiticicosa (Tree peony).

These pictures were taken only two days after the flowers had bloomed. Flowers that took much longer to open than the beautiful flowers my beloved Paeonia suffruiticicosa produced last year.

I posted content about them a few days ago in my blog entry, Blessed are those who mourn . . . , where I mentioned my concern for my dear friend KM, whose sister, MH, had suddenly died, and whose surviving family members were not letting her know of the occurrence.

Soon after that blog posting, New York City, where I live, and have my terrace garden, experienced an unusually heavy downpour that had me thinking that I had it all wrong when it came to quotations. I thought it was the April showers that brought the May flowers, not the May showers that drowned the flowers.
I found myself tempted to treat my plants like the actions of an over-protective mother: I wanted to go outside and place umbrellas around the newly born Paeonia suffruiticicosa flowers, so that the heavy rain would not knock off all of their petals — especially since the flowers had just bloomed a couple of days prior, however, I did not go out and place umbrellas over my Paeonia suffruiticicosa, because my rational mind kicked in, reminding me that rain is good for flowers.

Reminding me too of the American poet, Henry Wadsworth Longfellow's quote, "The best thing one can do when it's raining is to let it rain." Longfellow's quote has a "let-it-be" ring to it, and so as it continued to rain, I thought about my Paeonia suffruiticicosa's seemingly vulnerable state — newly born and subjected to an intense  downpour — but I also knew that my Paeonia suffruiticicosa would find a way to endure the rain, and that no matter what happened to it, I would love, nurture and appreciate it anyway.

There's something about rain that stills the mind, and, during the downpour, I thought about my friend KM, and of her not knowing that her sister had died, and also of how I might handle visiting her while keeping the surviving family members' confidence. My thoughts turned to JH, KM's surviving sister, and as I reflected on her, I thought of JH's granddaughters — whom I'd met on a number of occasions. I hadn't gotten a chance to speak to them at MH's funeral, but they were certainly on my mind.

The relationship that they had with the departed MH was probably not unlike the relationship that I had with my Great Aunt Grace — my grandmother's sister — someone I've referred to in previous posts which you can read by clicking here and here. In any event, upon thinking of those young girls, JH's grandchildren (which makes them the great nieces of the departed MH), I phoned JH to once again express my condolences to her, and, to share my concern for the well being of her grandchildren. It was with this phone call that I learned that JH had finally told KM that their sister MH had died. "I was on Metro North on my way to visit KM in the nursing home, " JH explained, "and I was determined in my resolve to not tell KM of MH's passing, but something was lifted when I entered KM's room, and I told her. Told her that MH had died, and, KM's reaction was accepting and beautiful." If you knew KM dear reader, you would not be surprised at this, for she is a strong woman with great faith.

This morning, when I stepped out onto my urban terrace garden to see how my herbs, plants, shrubs and trees survived the torrents of rain I was delighted to see my Paeonia suffruiticicosa was unscathed, and back to its business of flourishing, as seen in the photographs posted below: 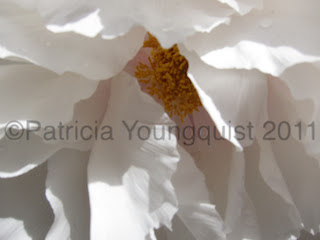 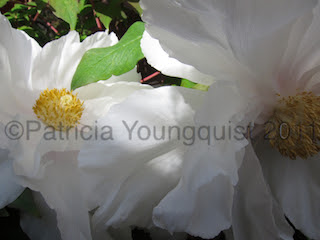 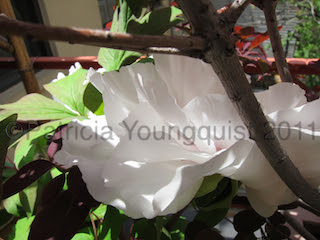 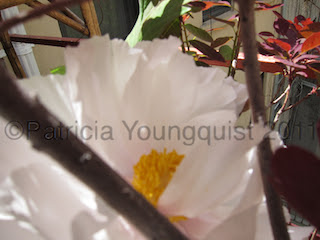 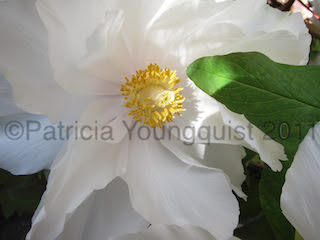 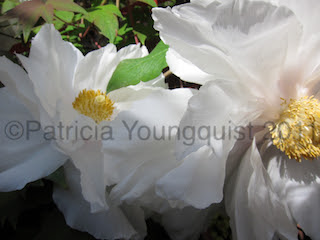 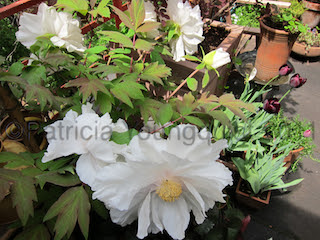 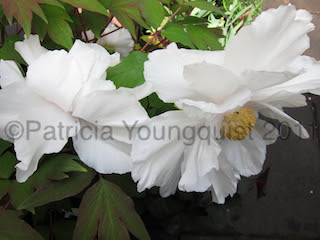 In fact, dear reader, one of the flowers seemed to be playfully winking and waving to me (as seen below) as if to remind me that KM would endure the probable rain in her heart caused by the passing of her sister MH. 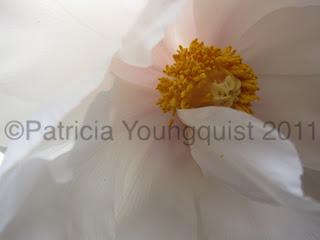