New York City has certainly experienced April showers in the past few days. More like April downpours, but out on my urban terrace garden, my Farfugium Japonicum (known as 'Cristata' to his friends) seems to be extending its leaves asking for more rain as  evidenced in the photograph posted below. 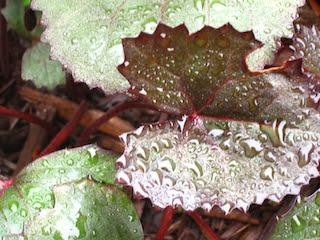 His leaves reminded me of the hands of the young Oliver Twist from the Charles Dickens novel of the same name. Perhaps you can see a similarity by comparing the extending leaves above to this photograph (copyright details here) posted below of a lad portraying Oliver. 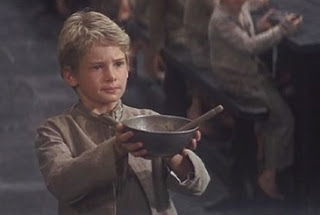 However, the comparison stops there as my Farfuguim Japonicum (AKA 'Cristata') unlike Oliver Twist, was not kidnapped, but raised in a nursery in Bayside Queens, where he received plenty of care before making the trip with me in 2009 on the Long Island Railroad to join the plants and shrubs in my terrace garden.
He can be seen below with my Rosmarinus officinalis (Rosemary), 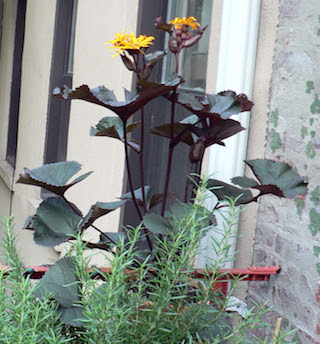 an herb used in a variety of culinary creations, and one that I often harvest to give to clients and friends because, besides being a great culinary asset, it is a symbol of friendship, as I have indicated in a previous post.


The unusual yellow flowers that you can see in this 2009 photograph of my Farfugium Japonicum are his pride and joy. Perhaps that is why he extends his leaves during the April rain, for he surely knows that April showers bring May flowers.
Posted by The Last Leaf Gardener