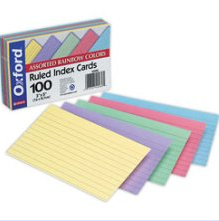 According to Wiki,"An index card (or system card in Australian English) consists of heavy paper stock cut to standard size, used for recording and storing small amounts of discrete data. It was invented by Carl Linnaeus." Linnaeus,  being famous for his contributions to taxonomy, is rarely associated with his invention of the index card, a "revolutionary" invention for managing data.

I often get side-tracked when web-surfing and discover many facts I might not have known (or even care to know) when looking for information on the Internet. Regarding index cards, I knew about the"heavy paper stock being cut to standard size" and that index cards are "used for recording small amounts of discrete data," but I did not know they were invented by Carl Linnaeus — nor, I must confess, had I thought much about their origin.

I was first introduced to the index card in its "standard" white variety (not the pastels shown above) when I needed them for a research paper on Joseph Smith that I was doing in grade school. The lesson in school was not rooted in Smith's relationship to Mormon history, but was a lesson in the gathering of data (life before Google), and extrapolating pieces of salient and concise information, and then recording it onto index cards.

The topic had been chosen by the teacher (in those days kids were seen and not heard, as opposed to today when it often appears adults are seen and not heard). The task was  somewhat daunting for me because I had great difficulty keeping my handwriting within the confines of those ruled lines that appear on the cards. If you follow my blog, then you may recall that I am legally blind, so you might imagine that being sight challenged can make it difficult to adequately make use of index cards.

My complaint about this was not accepted by my teacher, who gave me a very poor grade in penmanship, though she did acknowledge that I had excellent research skills. The nightmare of filling the space properly when using ruled index cards came again when I had to type information within those ruled lines to fulfill school assignments. For one thing, I had not mastered typing. In those days typing was taught — at least where I went to school — with the teacher placing text above the blackboard so that the students would not look down at the keys on the typewriter. My problem was that I could not see the text from where I sat, and I was put out in the hallway when I voiced my protests. I received a 'D minus-minus' that year for my efforts in "personal typing" and never did master putting  text on the ruled lines of an index card via handwriting, or typing either. To this day, I still type with one finger, and I look at the keyboard.

In terms of index cards, years and years after my grade school experiences I was faced with the "challenge" of writing my contact information on an index card. This time it was for a teacher in a voice-over class. It was a big class, and the teacher remarked how she needed to use this method in case she wanted to submit us for auditions and keep notes about us on the cards.

In any event, I fulfilled the task by putting my information on the blank side of the index card. The instructor did not send me out in the hallway, and instead remarked that two people had given her information in this matter, a woman named Joan Copeland and myself, and, she saw this as a sign of creativity.

At the time I did not realize that Ms. Copeland was Arthur Miller's sister, even though I had met him at my audition for Death of a Salesman, as I mentioned in a previous post. In any event, besides having the class put their pertinent contact information on the index cards, the instructor wanted us to watch and tape television commercials so that we could learn the "rhythm" of voice-overs.

I did not own a television at the time (nor do I now) so Ms. Copeland loaned me one of hers for the duration of the class, and while I never auditioned for a voice-over, I was healed of my FORIC (fear of ruled index cards).

Today, I've learned (via Science Daily) that Linnaeus's invention of the index card "marked a major shift in how eighteenth-century naturalists thought about the order of nature" and "the natural world was no longer ordered on a fixed, linear scale, but came to be seen as a map-like natural system of multiple affinities."


Evidently Linnaeus liked the idea that his method allowed information to be "complemented and reshuffled" (today's joys of cutting and pasting), and it strikes me that such a mindset would not have insisted that handwriting remain on the ruled lines as my grade school teachers, did, but, like the voice-over teacher, would've marveled at one using the other side in an effort to record the necessary information.
Posted by The Last Leaf Gardener