The Peonies Are in Bloom Again 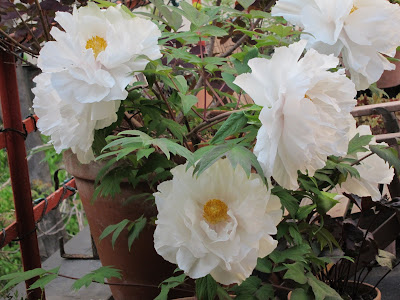 Peonies always represent elegance and style, don't you think? They are certainly wonderful for rendering into images to use for wedding invitations.

After all, the peony flower is the twelfth anniversary flower and is thought to be the omen of a happy marriage. The intended title for this new invitation is a modification of the famous Katharine Hepburn quote, in her role of Terry Randall (Stage Door) where she moved audiences with her words, "The calla lilies are in bloom again." My peonies are in bloom again, and it harkens me back to the time I first became aquatinted with peonies as cut flowers.

My grandfather introduced them to me (seen in the photograph below), when I was a toddler, his gentle hands bringing those beautiful petals to my impressionable nose. 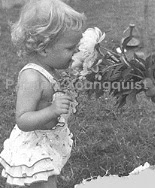 Peonies, I was to learn from stories he would tell, were named after Paeon (also known as Paean), a student of Asclepius, the Greek god of medicine and healing.

I learned Asclepius became jealous of his pupil and Zeus saved Paeon from the wrath of Asclepius by turning him into a peony flower. How often as a child, when anticipating the wrath of my parents, did I find comfort in imaging myself turned into a peony - until I learned that mischievous nymphs were known to hide in the petals of the peony, thus causing the magnificent flower to be given the meaning of Shame or Bashfulness in the Language of Flowers. I do admit peonies tend to look shy at times.

This is captured in this image posted below (taken in my amazing urban garden)! 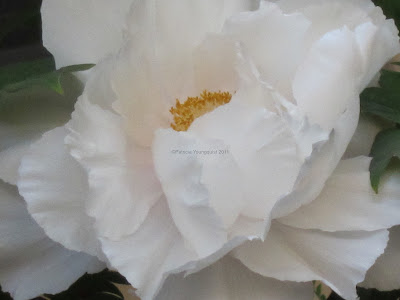