Cards that are about more than communication. 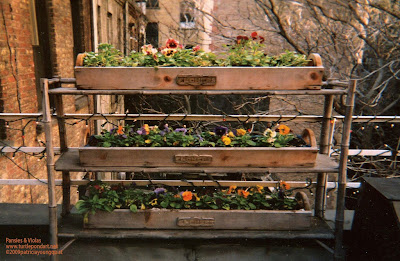 Although we are in the throes of winter, I am working on my collection of invitations that preserve a moment in time, event program covers that enhance an occasion, and creating note–cards that are about more than communication. My desire to bring back the practice of sending a paper card is even stronger than it was a short time ago when my friends and I were discussing the pitfalls of sending “E–cards” about which I blogged in a previous post, and I am thinking ahead to the forthcoming seasons and images that might celebrate them.

The card posted above is a sample from my edition known as The Petite Fold-Out Card Collection. Each card in this edition measures 5" by 4 and 1/4" and additional samples are posted below. They should be viewed this way: The right portion of each image is the front of the card, and the left side of each image is the back of the card.

Each card in this edition is blank inside. The one featured at the top of this post is titled Pansies and Violas. I’m encouraged to learn that others might feel strongly about sending cards this way too. Nine days ago (March 6th 2010), on National Public Radio affiliate WNYC’s The Leonard Lopate Show, the host’s featured guest was the novelist and critic Thomas Mallon, who was touting his book Yours Ever, People and Their Letters, published by Pantheon. As Daniel Okrent states in a November ’09 review of the book, “Mallon’s writing about a practice that for at least eight centuries was the primary means of communication between people who happened not to be in the same place at the same time. It was more than just communication, though; it was a form of human conduct enhanced, even exalted, by the demands it imposed on those who practiced it.” Okert explains that Mallon writes, “The small hardships of letter writing — having to think a moment longer before completing utterance; remaining in suspense while awaiting reply; having one’s urgent letters cross in the mail — are the things that enrich it, emotionally and rhetorically.”


Okert concludes that, “Given the present and future of letter writing, it’s a privilege to be cherished.” Hearing the interview with Thomas Mallon, and re–reading Daniel Okrent’s review, leads me to believe that not only is letter writing a privilege to be cherished, but so is the sending and the receiving of paper cards. The impact (on quality communication) of mass–produced–E–cards getting lost in cyber–space, either by a spam filter or a broken link, is threatening whatever little personal touches have been left in communicating these days — and is fueling impatience as well as the need for immediate gratification.

E.B. White had this to say about greeting cards (The New Yorker, 6-19-54): “A greeting–card firm has sent us some statistics about the expression of friendship and good will in America. The figures were staggering. In 1953, some three and a half million cards were mailed carrying greetings of one sort or another. Friendships ranked high on the list, along with Get Well Soons, Happy Birthdays, and Merry Andsoforths. For a firm dealing in the emotions of love and affection, the statistician’s mind runs on very strange matters indeed. Thus we read that the money spent on ‘friendship’ in 1953 would ‘pay for a battle-ship.’ And if stacked one atop another in their envelopes, those three and a half billion messages would ‘make a pile so high that even the Russians couldn’t invent a guided missile that could get over the top of it. It would be 4,375 miles up in the ionosphere.’ There seems to be something wrong here somewhere. Perhaps we should simply stack these friendship cards instead of mailing them, thus warding off unfriendly missiles. Or perhaps we are sending the cards to the wrong people. Why doesn’t some enterprising greeting–card firm get up a mailing list of our ‘enemies’ (there must be billions of them), to whom a friendship card would come as a real surprise? The money spent on the cards would still pay for a battleship, but if the cards worked, the battleship might never have to open fire.”

In anticipation of spring, summer, and fall, I have recently created a unique line of all occasion greeting cards based on (but not limited to) my garden images, which I sell at select venues and to private clients. The nature based images in these beautiful cards are a nice way for you to announce that you have scaled Mount Kilimanjaro, cycled from Manhattan to Cape May, have completed the Midnight Run in Central Park to ring in the New Year, scooped up eighty martini glasses for $100 at The Tavern on The Green’s recent auction run by The Guernsey’s, or to say a very special message when e–cards just won’t do.

There are other Petite Fold–Out Cards not seen here, which are perfect for inviting folks to your own garden party, or to announce you have finished writing your libretto — and to thank your agent, publicist, cast, and your dear friends who supported your efforts as you rose to success — as my friend and talented client Charles Leipart, the celebrated librettist, has done with cards he has purchased from me. Charles has purchased from my Black and White Note–Card collection as well as the Fold–Out Collection. Here is one of his favorites, October in the Woods #2: 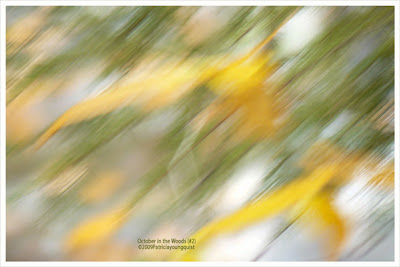 So if someone has had you for dinner serving you a special cuisine, or celebrated a significant birthday (they are all significant) with you by offering a toast, or taken you on a voyage, or even given you a job interview — why not take out the pen and write a personal note that won’t get lost in spam but will be welcome in a snail–mail–box amongst bills and campaign requests. If you are worried about not being green by sending a paper card, please note that these cards have a double–life, because the unique feature of these cards is that the image is continuous, folding out into a print that is 8.5" by 5" which is suitable for framing. It’s a nice way of preserving a moment, as seen below with the card titled, The Last Leaf Gardener. 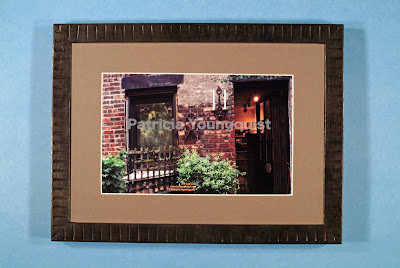