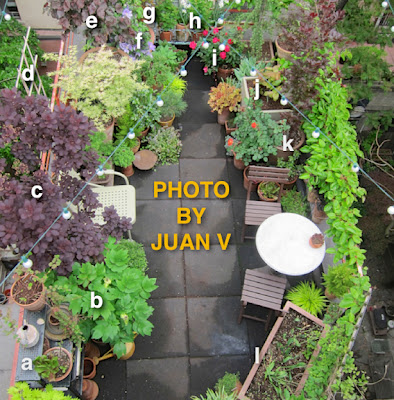 Today's post is part two-C of a series of posts pertaining to a year-end review for special occurrences in my urban garden for the year 2012 (the schedule for this series is described in part one as well as part two-A of this topic) and in today's entry I will be reviewing the month of May for the year 2012.

In describing the month of May in Camelot, Guenevere, exclaimed that it was "a shocking time of year"  and a time when "the birds and bees with all their vast amorous past gaze at the human race aghast." And while that might've been the case in Camelot, the first week of May 2012 brought no birds or bees in my garden; however, it did bring a number of other things which I've attempted to illustrate by superimposing some letters over an aerial photograph Juan V took for me after we completed "yard work" in my garden on May 8th of 2012. The following is a key to what a given letter within this particular image is referring to.

Letter "a" is referencing Juan's urban hedge "installation" which was described in detail in part two-B of this series and it was also referenced in part one of this series.

Letter "d" (middle of left edge of image) is referencing my trellis-style urban hedge which Juan V and I decided to leave bare for the 2012 growing season as described in detail in part two-B of this series and it was referenced in part one of this series.

Letter "i" is referring to 2012's new "digs" for my Autumn Clematis which were described in part two-A of this series.

As for the other letters superimposed on the image, letter "b" (left side of image) is referencing how my Paeonia suffruiticosa (AKA Tree Peony) appeared within the first ten days of May. As you may recall from part two-B of this series, my tree peony bloomed very early in April and by the end of that month, due to some heavy April showers, had lost all of its blooms! This was disappointing because in bygone years, my sweet tree peony (a shrub) flourished in May! However, this shrub did have brilliant foliage in 2012's May; the green was so spectacular that I ultimately featured it one of my garden-themed Virtual Stories (movies), 50+ Shades of Green, which can be viewed in my Vimeo Library by clicking here.

Letter "c" (left side of image) is referencing some yellow flowers which appeared on my Continus coggygria (AKA Smoke Bush or Royal Purple or 'Grace'). Juan V took an aerial of these delicate flowers and I've posted it below. 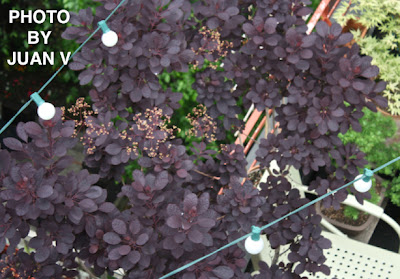 Letter "e" is referencing the magnificent foliage on my Avellana corylus (AKA Contorted Hazelnut) which was thriving in its new location and "digs" as discussed in part two-A of this series. Its crinkly textured, burgundy colored foliage is indicated by a square superimposed over an image below. 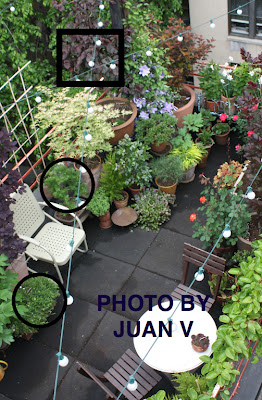 This image was also taken by Juan V on May 8th 2012, and the circles in the image indicate two things that were thriving but would ultimately be killed by a heat wave in July which I will get to when I'm covering that month which I will be doing this Friday, January the Eleventh of 2013.

Meanwhile, getting back to the what the letters are referencing in the image atop today's blog entry, letter "f'" is referencing the early lushness of my H.F. Clematis, a vine whose magnifcent purple foiage was early in 2012 compared to what it had been in May of 2011 when it did not appear until it was nearly the middle of May!

Letter "g" is referencing my Physocarpus opuliofolius's (AKA 'Mindia' or Coppertina Tree) foliage as well as new its new "digs" (container). The coppertina's 2012 "situation" was referenced in part one of this series.
and a close up of this detail (circled) is posted below.

Juan V and I were astonished at how big my coppertina tree was getting as it had only been one year and three days, May 5th of 2011, when we had repotted it! In any event the coppertina's scenario re its 2012 "digs" was discussed in another entry posted here on Blogger which included the collage that is posted below. 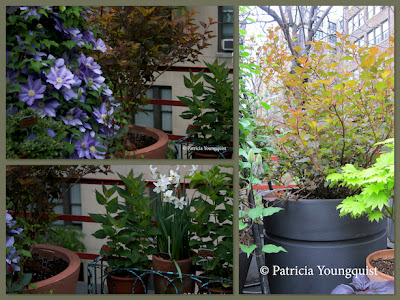 And now back to the image atop today's entry and what various letters are referencing. The letter "h" is referencing my Hyssop Plants, plants who had been frequently visited by bees in 2011 but who were growing so big, I had to ultimately give them to Michael (a man I've mentioned in posts  on blogger including one you may refer to by clicking here) to use in a tree pit he wound up planting at the end of May as seen below.


Meanwhile letter "i" is just referencing the fact that roses were busy thriving in my garden as of early May in spite of the fact that heavy 2012 April showers took away certain 2012 May flowers!

As for letter "j", it is referencing a very large container that I had to get to accommodate my Actinida kolomikta and Actimida (AKA Kiwi Vine); this vine is growing so quickly, you'd think it was taking performance enhancing drugs! In any event, finding a container to accommodate this vine was not an easy task, but I did, and Juan V repotted the vine for me on May 8th 2012.

This container change was referenced in part one of this series and the kiwi itself was mentioned in both part two-A and part two-B and as I write this I still hope to make a sequel to the garden themed Virtual Story (movie) which I produced in its honor. The title of that endeavor is The Kiwi Speaks! Fifteen Minutes of Fame . . . almost, and it may be viewed within my Vimeo Library by clicking here.


Finally, in terms of the references being made in the image atop today's blog entry, letter "k" is referring to new and bigger "digs" which my Fagus sylvatica (AKA Beech Tree) needed to accommodate its growth! The following image is a close up of the aforementioned containers. The kiwi's is indicated by a white arrow and the beech tree's is indicted by a red arrow. 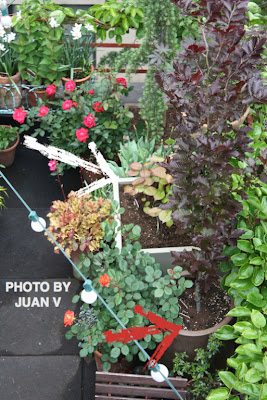 And as you probably surmise, dear reader, there was a lot of garden activity for the first eight days in the merry merry month of 2012's May as well as one big day of "yard work" with Juan V on May 8th of 2012!

Juan V ultimately came one more time in May, towards the end of the month, on May 28th 2012 and during his absence, many of the things I grow had very full lives and the following photo-ops reflect a couple of the newbies — first time blooms in my garden, even though I've had the plants (that "bore" them) for a number of years!


And of course, there were the "usual" antics of what grows here where they seemingly mirror Shakespeare's As You Like It, by having their entrances and their exits as seen below in a "representation" of a few, as I cannot include all 80+ things which I grow within this venue. 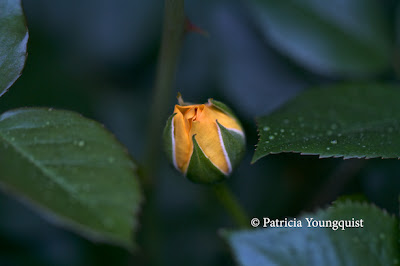 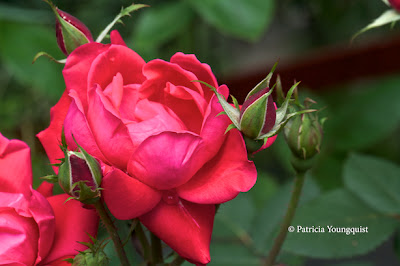 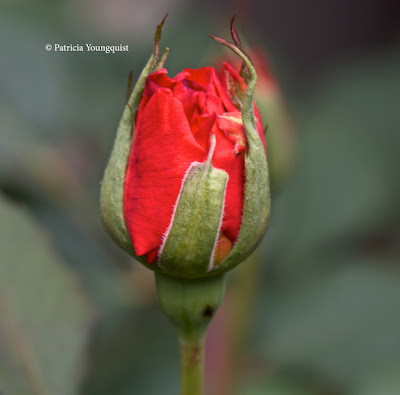 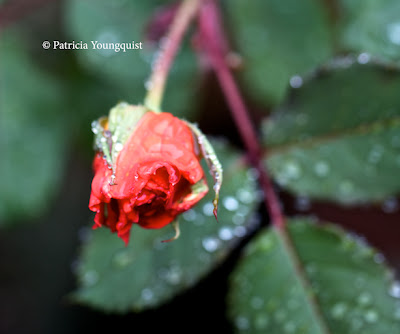 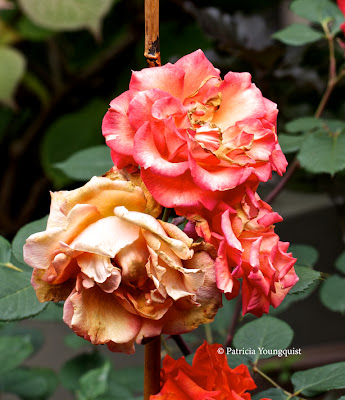 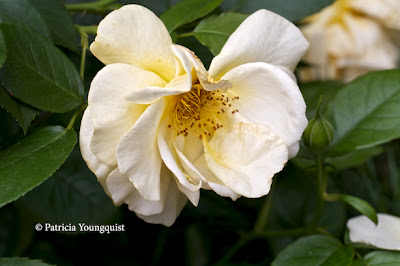 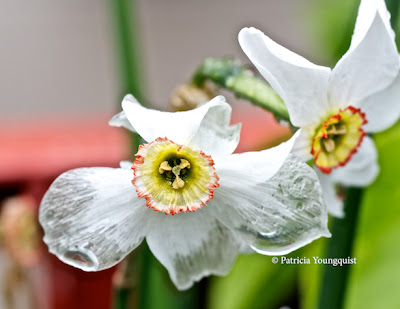 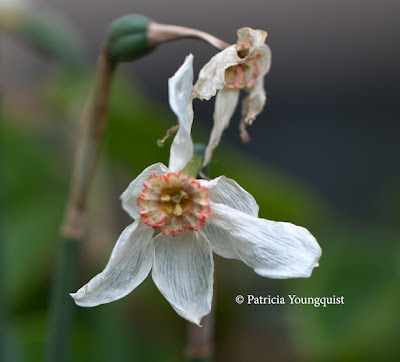 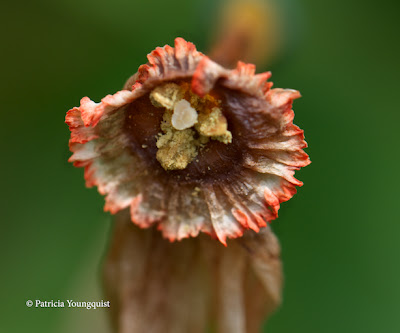 The flowers from my H.F. Clemstis entered . . . 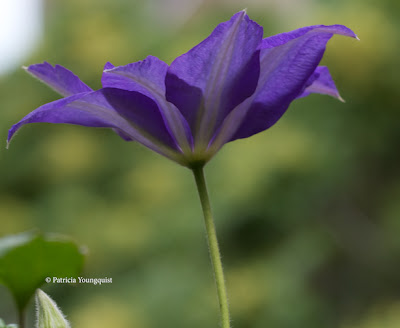 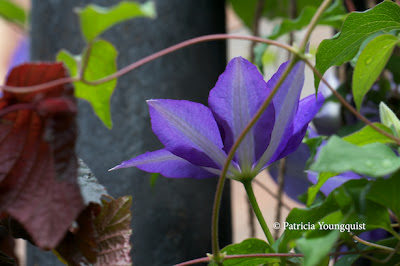 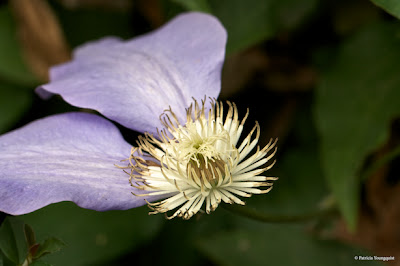 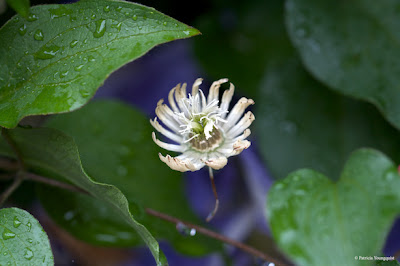 My chives that had made their appearnce in March of 2012 (a fact discussrd in part two-A of this series), in mid May, produced lovely flowers as evidenced by the photo-op below, 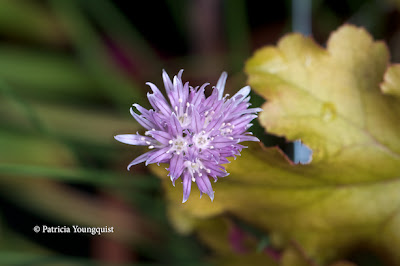 whilst the Heuchera (AKA Coral Bells as told earlier in this narrative), foliage was the lushest it has been in years as seen below. 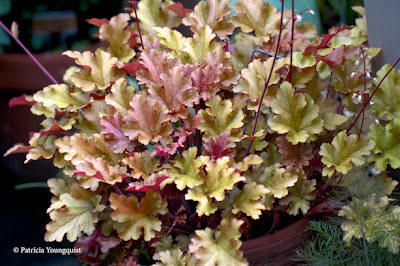 And it was the same with my beloved larch as evidenced in the image below, 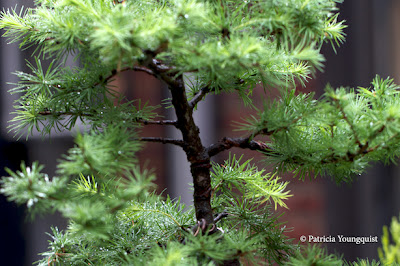 but both of these beauties would ultimately die in a heat wave that would occur in July of 2012, hardly anything I could've done much about, but it broke my heart to lose them — especially the larch, which I discussed on Blogger in a previous post.

And in mid May the tulips were long gone, an early nap, and I hope they will thrive again when they awaken from for the 2013 season —  but I did enjoy their "pods" as well as their spent folige as evidenced from the photo-ops below. 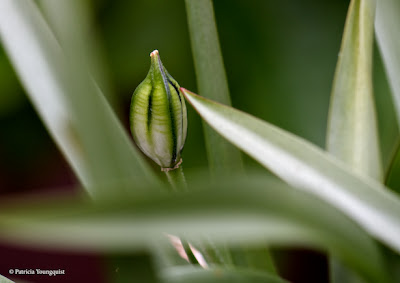 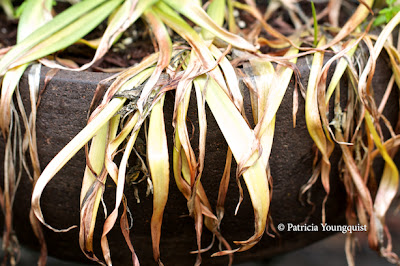 This brings me to Juan's second visit in May, May 28th of 2012, and the following aerial photo-op was taken by him after we completed our work. 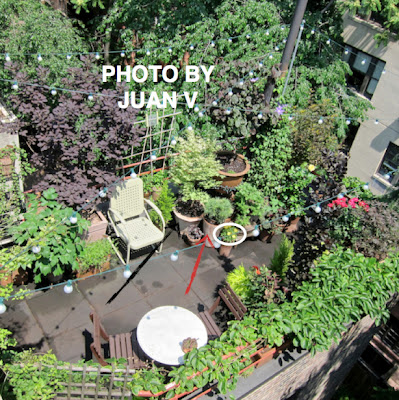 Our work which included tucking away all my containers of tulips throughout the garden since they wee finished with their work for the year and we also did a bit of repotting things into bigger containers to meet their needs.

BTW, the white circle is referencing my Helichrysum bracteatum (AKA Strawflowers), which as you will see in the remaining parts of this series would prove to bring much delight to my garden in the months to come!

And with that thought I'll conclude my review for May of 2012, but not before mentioning that on Juan's visit he saw a humming bird in my garden and the next day I thought I saw a robin which prompted me to hang a "basket" of bread from my urban trellis-hedge as seen in the photo below. 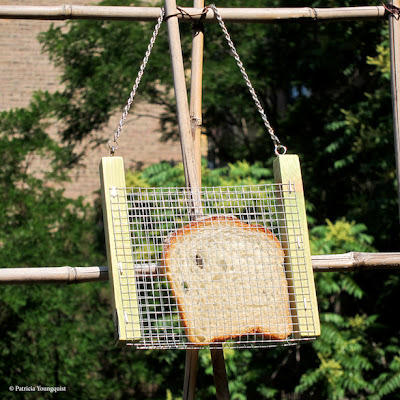 I was hoping that Guenevere's observation re spring (which I stated at the onset of this posting) re "the birds and bees" would come true for me — in spite of the fact that my garden is in New York City and not Camelot would pay visits to my garden!

And this leads me to a question I have for you, dear reader, and that is this: do you think that Guenevere was correct in her "observation," that the month of May is merry?"